KassemG appeared as himself in Nice Peter vs EpicLLOYD and Cleopatra vs Marilyn Monroe. He also portrayed Lando Calrissian in Hitler vs Vader 3.

Kassem Gharaibeh, more commonly known by his nickname, KassemG, was born on October 10th, 1983, in Amman, Jordan. He is a comedian and YouTuber mostly known for his online series California On, Going Deep, and Street Music. His main YouTube channel has over 2.5 million subscribers and 442 million views. He is also one of the co-founders of Maker Studios (now Disney Digital), the studio that used to produce Epic Rap Battles of History.

Appearances in the rap battles

Kassem appeared after Nice Peter's final line, making his entrance on an epic flying wolf to act as a mediator between the two parties and suggests to Peter to make a second season and an official YouTube account for the rap battles.

Kassem appeared when Marilyn Monroe said the line "This ugly hag and KassemG got matching noses!"

He appeared during the prologue as the character Lando Calrissian. In this prelude, they were parodying a scene from Star Wars VI: Return of the Jedi where Luke escapes Darth Vader, only this time Luke was switched with Adolf Hitler. 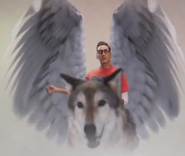 KassemG on the flying wolf 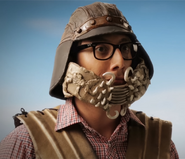 KassemG as Lando Calrissian texting in the background 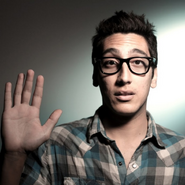 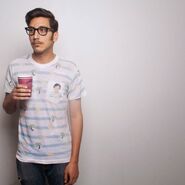