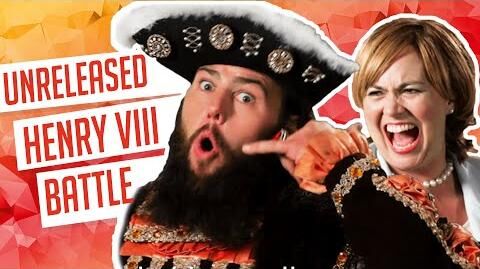 King Henry VIII vs Hillary Clinton is an unofficial installment of Epic Rap Battles of History that was planned as the seventeenth installment of Epic Rap Battles of History and the second episode of Season 2; however, it was ultimately scrapped mid-production. It would have featured the 16th century King of England, King Henry VIII, rapping against the former U.S. Secretary of State, Hillary Clinton. A 15-second clip of Clinton's scrapped verse was eventually released on Susan Deming's channel on October 3rd, 2014[1], with the full audio being released on the Epic Rap Battles of History Website on December 21st, 2017[2], and the full video following on February 15th, 2020, as part of a Season 6 update video on the ERB2 channel.

Nice Peter as himself (cameo)

Unknown as an executioner (cameo)

[Note: King Henry VIII is in orange, while Hillary Clinton is in light blue.]

I am Henry the Eighth, king of England, Ireland, and Wales!

You are a presidential candidate in a pantsuit who fails!

Girls don't belong in politics, too much stress!

You should stay at home and wash the stains out of another lady's dress!

I tend to have separation issues with women.

It's like their heads are the Pope, and their necks the Church of England!

Madam Secretary, hold my calls! I'm off for a walk!

'Cause no one's beat you this bad since a swarthy man named Barack!

You done messed with the wrong Rodham. I'm about to Tudor and boot it!

It's not your wives' fault your balls keep making daughters!

Your country's the size of Ohio; you couldn't even beat Spain!

I could defeat you with the Grassroots email campaign!

I'd eat you alive, but I'd probably never finish!

You're so fat, your body could feed a whole freaking village!

The only way you could beat me is if maybe we wrestled!

I mean, come on! Is it any wonder why you can't keep your man at home?

The only thing getting blown is Bill's saxophone!

You couldn't even handle the goods that I'm selling!

I'm more powerful than Oprah! And more handsome than Ellen!

Don't you interrupt me, you chauvinist prick!

You put the needs of your country behind the whims of your dick!

I'll banish you back to your own Tower of London, baby!