Epic Rap Battles of History Wiki
Register
Don't have an account?
Sign In
Advertisement
in: Actors, Behind the Scenes, Season 4,
and 2 more

Gregory "Greg" Davis Jr., also known as Klarity, was born on October 1st, 1984, in Orlando, Florida. He is an American actor, poet, producer, and Vine celebrity of Jamaican descent. He is one of the most popular Viners on the site, with over a billion loops to his name. His Vine account can be found here. He is also a series regular on the TBS channel show 10 Items or Less, as well as appearing in episodes of CSI: New York, Lincoln Heights, and The Shield.

Klarity as the Zulu warriors 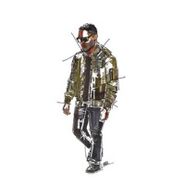