Kyle Herman portrayed himself in Nice Peter vs EpicLLOYD 2.

Kyle Herman was born in March, 1994, in California, United States. He is a freelance filmmaker and a member of the Epic Rap Battles of History crew. He has worked as a first assistant camera, or focus puller, for the series since Donald Trump vs Hillary Clinton. He is primarily responsible for focusing and refocusing the camera lens as actors move within the frame of each shot. He is also known for his work on the short films "Curtains" and "Poets". Furthermore, he has been a director of photography for the sketch group Bath Boys Comedy since 2011. In October 2017, he started work for the comedy site CollegeHumor as a behind the scene content producer.

Herman made his cameo appearance in Nice Peter vs EpicLLOYD 2 during the interlude between Nice Peter's third and fourth verses, saying, "Quiet, please!", telling the others in the ERB Studio to be quiet for filming. 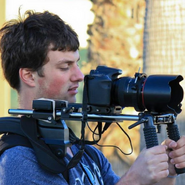