Lance Edward Armstrong was born on September 18th, 1971, in Plano, Texas, under the name Lance Edward Gunderson. He is a professional American cyclist and testicular cancer survivor. Throughout 1999–2005, Armstrong won the Tour de France seven consecutive times. In 2012, he got all seven of his Tour de France titles stripped from him due to evidence of him using performance-enhancing drugs. He is also known for the Lance Armstrong Foundation, which donated money to cancer victims for a cure to the disease. However, it was renamed the Livestrong Foundation when he resigned due to the doping scandal in 2012.

So swing, batter, batter! Show me what a fatter rapper can do! 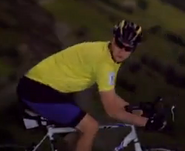 Lance Armstrong in his full cycling outfit
Add a photo to this gallery
Retrieved from "https://epicrapbattlesofhistory.fandom.com/wiki/Lance_Armstrong?oldid=1450557"
Community content is available under CC-BY-SA unless otherwise noted.