Larry Bird battled Big Bird in the Flash in the Pan Hip Hop Conflicts of Nowadays battle, Larry Bird vs Big Bird. He was portrayed by EpicLLOYD.

Larry Joe Bird was born on December 7th, 1956, in West Baden Springs, Indiana. He is a professional basketball executive, former coach, and former player, most recently serving as president of the Indiana Pacers in the National Basketball Association. After retiring as a player for the Boston Celtics, he was a mainstay in the Indiana Pacers organization, but stepped down from the position of president following the first round of the 2017 Eastern Conference playoffs. He has been described as one of the greatest basketball players and greatest shooters of all time. 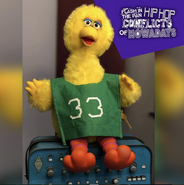 The Big Bird doll in Larry Bird's jersey featured in the battle, posted on ERB's Instagram page
Add a photo to this gallery
Retrieved from "https://epicrapbattlesofhistory.fandom.com/wiki/Larry_Bird?oldid=1468354"
Community content is available under CC-BY-SA unless otherwise noted.