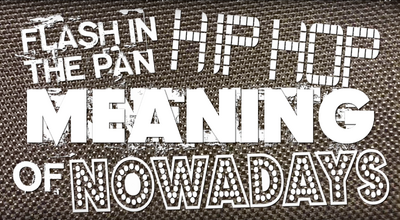 (Big Bird introduces himself as the main character from the children's show Sesame Street, breaking the fourth wall as if the audience knows him as a friend.)

(Larry Bird has a shoe size of 17, much larger than most basketball players, as well as the average human, and Big Bird acknowledges this as freakish.)

(Oscar the Grouch is another Sesame Street Muppet who has messy green fur and a curmudgeonly disposition. He lives in a common trash can with an assortment of rubbish he collects. Big Bird compares his opponent to Oscar's trash, calling him worthless.)

(Larry Bird played for the Boston Celtics, whose team uniform is all green. He also sported a mustache, and Big Bird says his green outfit makes him appear to look like Shrek, whose skin is green.)

(Big Bird makes a pun on Larry's name, calling him "scary". Shrek, a fictional character whom Big Bird compared Larry to in the previous line, is a literal ogre known for scaring people.)

(Big Bird says that he is an icon of childhoods, as many people grew up watching Sesame Street and would see him frequently on the show.)

(One on one is a variation of basketball, which Larry plays, in which instead of teams, there are only two players who oppose each other. Similarly, this is a one-on-one battle, which Big Bird says will result in Larry not scoring a single point.)

(One of Larry's nicknames is "Larry Legend." Larry calls himself a legend in basketball and says his rhymes are raw like oysters, which are eaten often without being cooked. Oysters are commonly associated with New England, which is where Boston is located.)

(Larry calls Big Bird a Muppet since he was created by Jim Henson. Larry claims he will school him in rap, or teach him in a similar manner Sesame Street educates its younger viewers. Larry was known for being able to shoot basketballs from the 3-point line, so he makes a pun by saying he will give him 3 points, or corrections, to teach him.)

(Larry's first point responds to Big Bird's line that calls him a freak due to his large feet, as it would be hypocritical coming from him; in addition to that, Sesame Street is known for promoting diversity, so Larry thinks it's out of character for Big Bird to mock someone because they're different.)

(Big Bird's legs resemble the bellows of an accordion. Bert is a recurring character on Sesame Street who has a long, yellow head, similar to Big Bird's beak.)

(Larry continues by warning Big Bird to not be in yellow when battling him, as Big Bird's feathers are all yellow. This is because one of the Boston Celtics' biggest rivals is the Los Angeles Lakers, a team whose uniform is yellow.)

(Larry threatens to smack Big Bird, who is known for being happy, for showing up to challenge him. Earvin "Magic" Johnson, who played for the Los Angeles Lakers, was one of Larry's on-court rivals.)

(Big Bird can often be naive in situations he is not familiar with, and normally gets rewarded just for completing such tasks. Larry, as a professional athlete, thinks this kind of consequence is pointless and unnecessary.)

(Sesame Street is revered for teaching many important lessons to children, but Larry disagrees. Despite being a bird, Big Bird is unable to fly.)

(Big Bird takes amazement at what Larry just stated, as he explains why in the next line.)

(As mentioned by Larry in the previous verse, Big Bird is a literal "flightless bird", a term used to refer to birds that cannot fly, such as penguins and ostriches. Basketball players are known for being able to jump so high it is almost like they are flying, but Big Bird says that Larry can't jump high at all.)

(Continuing from the last line, Big Bird says Larry is bad at jumping as well as running for making basketball shots. Big Bird suggests that Larry stay in the three-point line to play, as he wouldn't be as good anywhere else.)

(Larry Bird's nickname is "the Hick from French Lick" because he grew up in French Lick, Indiana. Big Bird says Larry isn't able to even harm him.)

(Big Bird says he moves like his friend Mr. Snuffleupagus. The "bob and weave", originally a feint in boxing, is an evasive maneuver in basketball wherein the player attempts to duck under defenders while moving around and through them, rising when his route clears, and ducking again as needed until open to make a shot. Big Bird tends to wobble in different directions as he walks, so it may look like he bobs and weaves all at once.)

(Larry Bird's basketball number was 33. Big Bird says that he is the greatest around while Larry Bird holds a lower rank than he does. Dunking on someone refers to a slam dunk, in which the bigger player would soar over the person defending the hoop and score by dunking the ball into the basket. Big Bird is over 8 feet, making him larger than Larry, and he claims to be dunking on him in the battle.)

(Sesame Street Presents: Follow That Bird is the first feature-length film to star Sesame Street characters, and tells the story of Big Bird being unwillingly relocated to live with a family of dodos. He uses the movie's title as a message saying Larry Bird cannot beat him as his verses would be tough to follow.)

(A fowl is a type of bird that is usually kept for its eggs or flesh, such as a rooster or hen. Larry Bird makes a pun on the word saying that Big Bird's lines were inappropriate and continues by saying that he is still the best when it comes to trash talking, as he is known for doing so in many of his games. This line may also be a callback to the previous conflict Ronald McDonald vs The Burger King, where McDonald's closing line was "You might be the King, but I wear the crown!")

(The feathers used in the original Big Bird puppet came from turkeys and ostriches. Down is a layer of feathers found on birds which are very fine and soft.)

(Continuing from the previous line, Larry Bird says that Big Bird will not be welcomed by the Boston Celtics, despite wild turkeys being very common throughout Massachusetts. To be "down" with someone means to be on good terms with them. He also sets up his next line by stating that he doesn't need to make an effort to defeat Big Bird.)

(Larry Bird accuses Big Bird of pedophilia for how much time he spends interacting with children and having them on his lap when he talks to them.)

(Larry thinks Big Bird should have been told something long ago. He explains what this is in the next line.)

(Big Bird's best friend, Mr. Snuffleupagus, was believed to be nonexistent by most of the cast of Sesame Street until he was actually introduced to the other characters in a 1985 episode. He is usually called "Snuffy" for short.)

(Larry Bird expects Big Bird to be too scared to rematch him.)

(As Big Bird says at the beginning of the battle, Larry wears size 17 shoes. Larry is saying that, if they were to rematch, Larry would kick Big Bird in the "egghole", or butt, as eggs are laid from a female bird's cloaca. Since only female birds lay eggs, this might also be a dig at Big Bird's masculinity.)

Retrieved from "https://epicrapbattlesofhistory.fandom.com/wiki/Larry_Bird_vs_Big_Bird/Rap_Meanings?oldid=1470409"
Community content is available under CC-BY-SA unless otherwise noted.