Leonidas I, or Λεωνιδας in Greek, was born circa 540 B.C.E. He was a warrior-king of Sparta, famous for his leadership of the 300 Spartans who fought and died in the face of insurmountable odds in the battle of Thermopylae in 480 B.C.E. during the invasion of Greece by the Persians.

Leonidas is said to have met the great and vast armies of Persia at Thermopylae Pass, where he sent 4,000 regular soldiers (hoplites) and 300 elite soldiers to fight. The Greek historian Herodotus wrote that the Persian Army had around seven million soldiers which "drank entire rivers empty". Packed tightly between the high cliffs of the pass, the Spartans held their position and were successful under unrelenting pressure from the Persians. However, a double-agent posing as a Spartan warrior is said to have passed Leonidas' battle plans to the Persians, allowing them to overtake the Spartans. Leonidas fell in this final stand, and died a great hero's death.

Although sources disagree, modern historians believe the Spartans and Athenians had around 7,000 soldiers and the Persians around 300,000 soldiers. As the myth became popular, these numbers may have been manipulated to emphasize the heroism of Leonidas and his men.

The story of this battle has been adapted many times, but the best known is the semi-fictional portrayal by actor Gerard Butler in the movie 300, based on the graphic novel series of the same name by Frank Miller. The film's most famous scene involves Leonidas meeting with a Persian messenger over terms of surrender; Leonidas adamantly refuses and holds the Persian at swordpoint, to which the Persian replies, "This is blasphemy! This is madness!", and Leonidas fires the retort, "Madness?! THIS… IS… SPARTA!!", kicking him into Sparta's Pit of Death. This scene has been the subject of numerous online video and musical remixes, which peaked during the early years of YouTube as among the most popular internet memes of that era.

This. Is. MY BIOOOOO!!! I am the Great King Leonidas. Hero-king of Sparta, the 17th of the Agiad line, son of King Anaxandridas II. You can come at me with black powder bombs, war-beasts and arrows that blot out the sun, but dying in battle is the greatest honor, so bring it on! Although, to be honest, I probably could have done things differently. Could I have been nicer to Ephialtes the hunchback so he didn't turn on me and ruin my plan to defeat Xerxes? Sure, but that's not really my style. I'm more of a "kick-a-guy-in-a-hole-to-start-a-war" sort of guy. Could I have worn a bit more armor? Yeah, but then nobody could see my sexy abs while they're trying to kill me. I just hope my son, Pleistarchus, can avenge me and live through his battles.

[Note: Leonidas is in gold, while the Spartans are in regular text.]

Show this petty officer who's the hardest! (Hoo!)

And tonight we shall rhyme in the shade!

Jerking off to games, giving themselves first person shooters!

You're in my hood now, chief! THIS IS SPARTA! 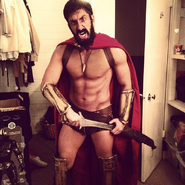 Leonidas posing Behind the Scenes
Add a photo to this gallery
Retrieved from "https://epicrapbattlesofhistory.fandom.com/wiki/Leonidas?oldid=1466440"
Community content is available under CC-BY-SA unless otherwise noted.