Lewis & Clark battled Bill & Ted in Lewis and Clark vs Bill and Ted. They are a duo consisting of Meriwether Lewis and William Clark; they were portrayed by Link Neal and Rhett McLaughlin, respectively.

Meriwether Lewis, born on August 18th, 1774, in Ivy, Virginia, and William Clark, born on August 1st, 1770, in Caroline County, Virginia, were American explorers dispatched by Thomas Jefferson to find a water route across North America and explore the uncharted West territory after Jefferson purchased the land from France in the Louisiana Purchase.

During their journey, Lewis and Clark were guided by a native Lemhi Shoshone woman named Sacagawea, who helped greatly in their expedition through the American continent by being an interpreter and helping the explorers in their dealing with the natives. The success of their journey helped strengthen the American concept of "Manifest Destiny"—the idea that the United States was destined to reach all the way across North America from the Atlantic to Pacific oceans.

[Note: Lewis is in dark brown, Clark is in light brown, and the bald eagle is in italicized text. Both of the team rapping at the same time is in regular text.]

You can't be starting with Lewis and Clark

'Cause we cut a path through MCs like a walk in the park,

Then give 'em back a whole stack of maps and accurate charts,

Showing exactly where our footprints on their buttocks are marked!

And we'll own you on the mic like the Louisiana Purchase!

You're worthless! Your future selves shoulda told you that.

Now go back in time and give Doctor Who his phone booth back!

We discovered bears and beavers and prairie dogs and weasels,

And plus flora galore! And according to our observations,

We inspired pioneers and travelers near and far!

You inspired air guitar and Dude, Where's My Car?!

We conquered much greater dangers in our trek through Mother Nature,

So step off, but tell Bill's stepmom: "Don't be a stranger!"

Did you hear that, Meriwether? I think they mean to brawl!

I'll take Neo. I'll take the one that no one knows at all!

From the falls of Black Eagle to the Pacific,

We put the 'dis' in dysentery 'cause we spit sick… (CAW!)

Without Rufus, you'd be useless on the trails we blazed!

You couldn't navigate your way out of a Circle K!

Send over Garth and Wayne because you turkeys aren't worthy.

Suffering your raps is a most Bogus Journey! 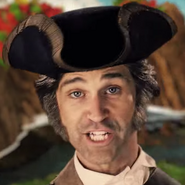 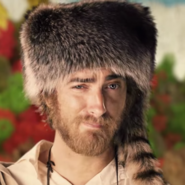 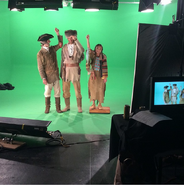 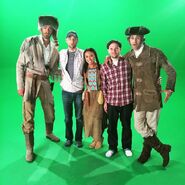 A picture of Lewis & Clark, along with Nice Peter, EpicLLOYD, and Sacagawea, posted on Lloyd's Tumblr account
Add a photo to this gallery
Retrieved from "https://epicrapbattlesofhistory.fandom.com/wiki/Lewis_%26_Clark?oldid=1455879"
Community content is available under CC-BY-SA unless otherwise noted.