Ludwig van Beethoven battled Justin Bieber in Justin Bieber vs Beethoven. He also made cameo appearances in Nice Peter vs EpicLLOYD and Lewis and Clark vs Bill and Ted. He was portrayed by Nice Peter on all occasions.

Ludwig van Beethoven was baptized on December 17th, 1770, in Bonn, Germany. He was a famous pianist and composer who widened the scope of sonata, symphony, concerto, and quartet, combining vocals and instruments in a new way.

Beethoven is often recognized as one of the greatest composers of all time despite being deaf, and eventually insane. Although he was deaf, he was still able to make music by using the vibrations of the notes to his advantage. Some of his most famous songs include his "Fifth Symphony", "Ninth Symphony", which also includes the "Ode to Joy", and "Für Elise".

Born in December in freezing cold Germany in 1770, named after my grandfather who he himself was a musician, against all odds, I was born for greatness. At 20 I traveled to Vienna to study with Wolfgang Amadeus Mozart. We never met. Then my mother died and my father started drinking himself to death. I was forced to return home and care for my two brothers. All the while I continued to play and teach piano, dedicating myself to my art. Soon, I began composing music, symphonies, ballets, concertos! I had many health problems, including abdominal pain, and bipolar disorder. Then, I went deaf. I refused to let any of it stop me! The music is too strong! Without hearing I went on to create some of the most beautiful pieces of music ever known to man, filled with sadness and fiery!! Music that inspired the world!! Unfortunately, I also happen to have the same name as a giant, stupid, slobbering St. Bernard dog in a ridiculous children's movie. It is infuriating.

Beethoven initially appeared next to EpicLLOYD during his first verse, after he said the line, "You should start leaving. Look, your hairline's already retreating!", as well as during Nice Peter's second verse, where he could be seen flipping over a piano, when he said the line, "You've got as much music talent as Chuck fucking Norris!" He later appeared again in the season 2 preview, next to Ben Franklin's quote.

Beethoven, alongside Abe Lincoln, Genghis Khan, and Joan of Arc, appeared briefly at the end of Bill & Ted's first verse, during the line, "Or you'll discover your Corps most triumphantly stomped!"

A scrapped scene from Lewis and Clark vs Bill and Ted featuring Bill & Ted alongside multiple cameos, including Beethoven 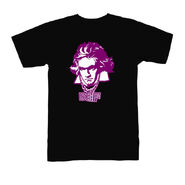