Macho Man Randy Savage took over for Hulk Hogan against Kim Jong-il in Hulk Hogan and Macho Man vs Kim Jong-il. He also made a cameo appearance in Nice Peter vs EpicLLOYD, where he rapped a line alongside EpicLLOYD, and appeared once again at the beginning of Hitler vs Vader 3, alongside Leonidas and the Fourth Doctor. He has also made a cameo appearance in two ERB News videos, once as a ghost. He was portrayed by EpicLLOYD on all occasions.

Randall Mario Poffo, better known by his ring name, "Macho Man" Randy Savage, was born on November 15th, 1952, in Columbus, Ohio. He was a famous professional wrestler, best known for his time in the World Wrestling Federation and World Championship Wrestling.

Macho Man was a 6-time world heavyweight champion. He was officially inducted into the WWE Hall of Fame Class of 2015 by his longtime friend and rival, Hulk Hogan, the night before WrestleMania 31.

On May 20th, 2011, Macho Man suddenly died at the age of 58 in Seminole, Florida, of a heart attack while he was driving his Jeep Wrangler-he had lost control of the car and it crashed into a tree. This led many people to believe the accident killed him.

Sugar is sweet and so is honey and Macho Man is on a ROLL THAT CAN'T BE STOPPED!! My real name is Randall Mario Poffo, but I turned into the MACHO MAN when I started wrestling for the WWF. And I was the best, YOU HEAR ME? Everyone else out there is garbage! GARBAGE! I was the world heavyweight champion six times! I also did a lot of TV and voice over work because of my deliciously raspy voice! OH YEAHHHHH! Which reminds me, SNAP INTO A SLIM JIM! Workin' for Slim Jim too was barely healthier than wrestling, but it was good to be back on TV and SHOUTIN' ABOUT THINGS! Unfortunately, I died recently due to a massive heart attack while driving. It just makes me wanna give the biggest DAMN elbow drop of its crappy, little LIFE!!! OHHH YEAHHHH!!!

Macho Man can be seen on a passing speeder alongside Leonidas and the Fourth Doctor.

On behalf of the entire World Wrestling Federation! (Oh, yeah!) 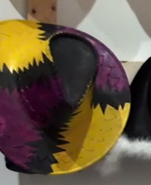 Macho Man's hat in Donald Trump vs Ebenezer Scrooge's Behind the Scenes video
Community content is available under CC-BY-SA unless otherwise noted.
Advertisement