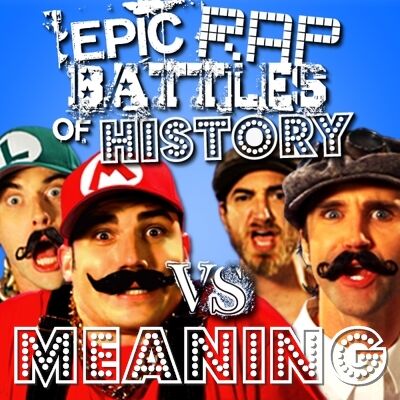 We're the Wright brothers, and there can't be no other!

(The Wright brothers make their introduction. This is a pun on their name's pronunciation (right brothers); they basically say they're the "real deal", as there are many famous Wrights, but only one noted pair of Wright brothers, making them unique.)

(The Wright brothers don't wish to start a fight. They ask if the Mario Brothers are just looking for Princess Peach Toadstool, the damsel in distress and Mario's love interest who usually gets kidnapped in the Super Mario video game series.)

(The objective of most Super Mario games is to travel through the kingdom and rescue Princess Peach, but she is taken from castle to castle. As the Mario Bros. make their way through these castles; however, they are usually met by Toad, who says, "Thank you Mario! But our princess is in another castle!" Here, the Wrights have Peach at home, and they took her away from the Mario Brothers.)

We stayed up all night playing Donkey Kong.

(NES players sometimes went on all-night gaming binges, presumably because they wanted to finish out a long or difficult game. Here, the Wright brothers "played Donkey Kong" with Peach, which could hint that they had her involved in role-playing sex, or sex in general. Donkey Kong was Mario's adversary in their earlier games, such as the original game that first featured Mario, Donkey Kong. However, Mario was named Jumpman in the game, and the woman he was saving was named Pauline and not Peach, but it still had the same concept of saving and rescuing.)

(Prior to the time the Wright brothers built the first airplane, the only way to fly was to use a hot-air balloon. The Wright brothers say that they were an innovative force who completely changed air travel.)

(Super Mushrooms are a common power-up in the Super Mario games which is collected for the Mario Bros. to grow in size and sustain one extra point of damage. Shrooms are also the common name of hallucinogenic drugs derived from mushrooms, and the Wright brothers imply that the Mario Brothers are drug addicts for picking up these shrooms, and they're not intimidated by the childish way they act.)

(The Wright brothers dare the Mario Bros. to tangle with them, for if they do, they will lose a life, as they're limited on how many lives they can have. In the games, the player starts with 3-5 extra lives and can add extras by collecting green 1-Up Mushrooms or 100 coins. "Shoulda Woulda Coulda" is a song by Beverley Knight.)

(The Wright brothers also warn the Mario Bros. that they should retreat from the battle using a warp pipe to move underground, where the usual theme is put into words as "dudda-dudda-dudda".)

(The Mario Bros. begin with their now-classic intro. Mario uses the phrase, first coined by his Nintendo voice actor, Charles Martinet, "It's-a me, Mario!", which is how he introduces himself in some of his games, most notably in Super Mario 64. Luigi breaks in with coarse language, but is censored, or "bleeped" with the coin-collect ping from the game series.)

(The first airplane the Wright brothers made was a biplane, a fixed-wing aircraft with two main wings stacked one above the other. Since the prefix "bi" (meaning "two") is also a contraction of "bisexual" (referring to a person who can be attracted to both genders), the Mario Bros. imply that the Wright brothers are interested in other men, telling them to go kiss because of their seemingly intimate relationship from working together for so long. This may also come from the fact that neither Wright brother had married, and the only person they could get is each other.)

(The Mario Brothers assume that the Wrights were frequently teased and picked on, as well as being no-life losers. Their reason is stated in the next line.)

(The Wright brothers are geeks with archaic and funny-sounding names, which is the reason the Mario Bros. assumed they were dorks.)

(When the Wrights started to make the biplane, they would focus on it for many months, therefore spending most of their time on it. The Mario Bros. are shocked that this was even the case.)

(In Super Mario Bros. 3, Mario and Luigi can collect a power-up, known as the Super Leaf, which gives them a raccoon-like appearance with the ability to fly after a running start. They say that the Wright brothers shouldn't have wasted their time on the biplane and should have just collected a Super Leaf instead.)

You should eat something anyway! Look at you, so skinny!

(The creation of the biplane also gave the Wrights times when they would skip eating to focus on their plane, causing them to lose mass and weight. Mario and Luigi, being of Italian heritage, are insulting the two in the same stereotypical way that Italian mothers and grandmothers might insult a relative or friend not getting enough to eat, which sometimes will have them serve more.)

(The Mario Brothers say that while the Wrights might be good at flying, their rapping skills are weak. It also references the place where the biplane was tested successfully: Kitty Hawk, North Carolina.)

We don't need to fight! We're the fathers of flight!

(The Wright brothers, nicknamed "The Fathers of Flight" for being the inventors of the modern airplane, think battling the Mario Brothers is a waste of time. It is also a subtle play on the "fight or flight" response triggered by adrenaline. In other words, the Wrights would prefer to flee by taking off in a plane.)

(Although they had been raised in Ohio, the Wright brothers spent much of their working lives in North Carolina. "Aiiiiight!" is also the way some Southern Americans pronounce "alright", rather than saying it normally. Coincidentally, Rhett & Link, the YouTube comedy duo who portrayed the Wrights in this battle, also come from North Carolina.)

(Video game console controllers like Nintendo's gamepads have action buttons that are pressed on to make things happen, such as moving the player's character around. The term "pushing your buttons" means that you're irritating someone. The Wright brothers say they will annoy the Mario Brothers, and they'll control them as if they were the player.)

Conquer every level of your 2D scroller!

(2D scrollers are the format of earlier Super Mario games, as well as the later New Super Mario Bros. games. The Wright brothers now say they could complete every level of their games, calling them simplistic and easy to beat.)

("To talk trash" about someone means that you're insulting them. The Wright brothers say that even though the Mario Bros. have been dissing the Wrights, they've got something of their own they want to say.)

(In most 2D Super Mario games, holding the B button makes you run faster, so the Wright brothers say they'll defeat them quick like pressing down the button.)

(The Mario Bros. threaten to punch the Wright brothers with digitized punches since the first few Super Mario games were 8-bit. "Made to order" is a phrase often associated with restaurants and their foods, especially when the food can be custom-made for the patrons on request. Once again, the Mario Bros. play the food card, being Italian, and say they're about to lay a smackdown on the Wright brothers as if they came up to the counter and ordered it themselves.)

(Punching someone or something generally makes a pow sound. In the Super Mario series, there is an item called the POW Block, which first appeared in the 1983 arcade game Mario Bros. The POW Block could be hit or thrown to flip enemies on their backs or heads. This is also a reference to the line "BLAAAW, how ya like me now?" from the LL Cool J song "Mama Said Knock You Out.")

(The Mario Brothers say they are giving the Wrights burns with their rhymes. Bowser is the main antagonist of the Super Mario franchise who breathes fire in many games he appears in.)

(The Mario Brothers use a Super Mushroom here to grow to their larger size. They say a basic taunt, saying that the Wright brothers will get beaten down.)

(The Mario Brother say the Wright brothers will regret challenging them. A wind tunnel is a name for a place planes are held and tested.)

(Dropping bombs means saying very surprising and unexpected things, or in the Mario Brothers' case, bringing out blistering disses on the Wrights for the entire battle despite hardly talking, insulting, or threatening others in their games. Bob-ombs are recurring enemies in the Super Mario games that look like walking wind-up bombs with eyes.)

(Again, a play on words about how Wright sounds like "right", which can mean correct, while wrong is the opposite of right in that context. The Mario Brothers say that the Wrights weren't smart to challenge them.)