The Mario Brothers battled the Wright Brothers in Mario Bros vs Wright Bros. They are a duo consisting of Mario and Luigi, and they were first previewed in Nice Peter vs EpicLLOYD, later making two cameo appearances: through reused footage in Artists vs TMNT and on Ted "Theodore" Logan's t-shirt in Lewis and Clark vs Bill and Ted. They were portrayed on all occasions by EpicLLOYD and Nice Peter, respectively.

Mario and Luigi are fictional characters in the Nintendo video game franchise, Super Mario Bros., created by Japanese video-game designer, Shigeru Miyamoto. They are the most well-known characters of any Nintendo game series, as well as the primary mascots of the company.

Mario is depicted as a short, pudgy, and brave Italian-American plumber who lives in the Mushroom Kingdom, while Luigi is portrayed as the slightly younger, taller, thinner, and cowardly version of his fraternal twin brother. They repeatedly stop their nemesis Bowser, the leader of the Koopa race, and his numerous plans to kidnap Princess Peach, destroy Mario, and take over the Mushroom Kingdom.

Bowser usually has minions to help him stop the two from reaching the castles, which include Goombas, Koopa Troopas, Bullet Bills, Thwomps, Boos, Hammer Bros, and many others. The Mario Brothers use power-ups like Super Mushrooms, Fire Flowers, Super Leaves, Cape Feathers, and Super Stars to aid them in defeating their enemies.

Unlike Mario's multiple solo appearances, currently, there are only three games to feature Luigi as the main protagonist: Mario is Missing!, Luigi's Mansion, and its sequel, Luigi's Mansion: Dark Moon. A third installment to the Luigi's Mansion series is scheduled to be released in 2019.

It's 'a us! Mario and my brother Luigi! We're from the Super Mario Brothers video game made in Japan, a best selling game for over twenty years! We're Italian-American brothers plumbers just trying to save our princess who's in another castle. She was taken by a dick named Bowser. But we've got a lotta tricks up our sleeves, like taking mushrooms to get big, touching stars to become invincible, grabbing flowers to shoot fireballs and eating leaves to give us a sweet raccoon tail so we can fly! As brothers, we do everything together. We wear matching red and green outfits, we go swimming with squids, we drive Karts with our friends and lately we've even been hanging out in a new galaxy together. Except we both don't get the girl. That's all Mario. We've both work hard to save her, but when one of us slides down that flagpole with fireworks going off, goes into the castle and defeats Lord Bowser, it's always Mario who gets the kiss from Princess Peach. I usually spend the night chillin' with Toad.

The Mario Brothers were first previewed for Season 2 at the end of the battle.

The Mario Brothers appeared inside the arcade machine at the back of the Teenage Mutant Ninja Turtles' Sewer Lair throughout the entirety of the battle.

The Mario Brothers, along with the Wright Brothers, appeared on Ted "Theodore" Logan's t-shirt throughout the entirety of the battle.

[Note: Mario is in red, while Luigi is in green. Both brothers rapping at the same time is in regular text.]

You should eat something anyway. Look at you, so skinny! 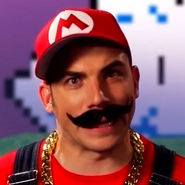 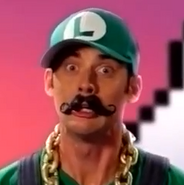 A sneak preview of the Mario Brothers