Marty McFly made a cameo appearance in Doc Brown vs Doctor Who. He also appeared again on a poster throughout Lewis and Clark vs Bill and Ted. He was portrayed by EpicLLOYD on both occasions.

Martin Seamus "Marty" McFly is the main protagonist of the Back to the Future films. He travels through time with a DeLorean car turned time machine which was invented by his friend and local crazy scientist, Dr. Emmett Brown. His ventures throughout the films include traveling from the year 1985 to 1955, 2015, an alternate 1985, and 1885. In the trilogy, his character was portrayed by actor, Michael J. Fox.

Doc Brown vs Doctor Who:

Marty McFly appeared following the Fourth Doctor's verse after he said, "'Cause you're a pitiful hillbilly hanging with an oedipal kid who's a bawk bawk chicken!", answering with, "Nobody calls me chicken!", and then playing a short guitar riff. He was seen twice more: once in the background during Doc Brown's second verse and again during the "Who won? Who's next? You decide!" sequence.

Marty McFly appeared on a poster labeled "Eighties Music" on the window of the Circle K throughout Bill & Ted's verses. 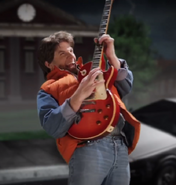 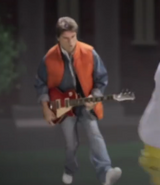 McFly during the "Who won? Who's next? You decide!" sequence
Community content is available under CC-BY-SA unless otherwise noted.
Advertisement