Matteo Iadonisi, better known by his stage name, Mat4yo, was born on April 4th, 1996. He is an Italian-American YouTube rap battle creator, musician, actor, and production assistant. He releases music, including rap battles, under the Kevin Krust Multimedia label. He runs a YouTube series known as Chisel This!, where he analyses the verses and lines of rap battles, made both by Epic Rap Battles of History and members of the fan community. He joined the writing team for ERB in Season 5. He has an account which can be found here.

Chisel This! episodes of Epic Rap Battles of History 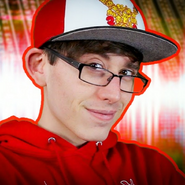 Mat4yo's YouTube avatar
Add a photo to this gallery

Retrieved from "https://epicrapbattlesofhistory.fandom.com/wiki/Mat4yo?oldid=1479916"
Community content is available under CC-BY-SA unless otherwise noted.