Epic Rap Battles of History Wiki
Register
Don't have an account?
Sign In
Advertisement
in: Actors, ERB Crew, Behind the Scenes,
and 4 more

Matt Sherin was the body actor for a Dalek in Doc Brown vs Doctor Who.

Matthew "Matt" Sherin was born on September 9th, 1986, in Pacoima, California. He is a special effects technician, make-up artist, musician, and a former member of the Epic Rap Battles of History crew. He worked in the art department for props in four battles: Doc Brown vs Doctor Who, Moses vs Santa Claus, Gandhi vs Martin Luther King Jr., and Nikola Tesla vs Thomas Edison. He created the Dalek costume used in Doc Brown vs Doctor Who and was also the body actor for it. He currently works as a lab technician in Illusion Industry Inc. and also in the molds/castings department in the Custom Characters Inc. Furthermore, Sherin is the drummer for the post-punk band Egrets on Ergot.

Matt Sherin as a Dalek (cameo) 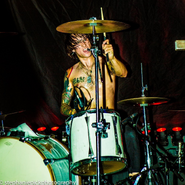