Michael Benjamin Bay was born on February 17th, 1965, in Los Angeles, California, United States. He is an American film director and producer who is known for directing high-budget action films that have a strong use of fast edits, stylistic visuals, and an even more excessive use of special effects, usually consisting of explosions. His films, which include The Rock, Armageddon, Pearl Harbor, and the Transformers film series, have grossed over $5 billion U.S. dollars worldwide. Despite his considerable success at the international box office, Bay has been heavily criticized for his work by film critics and viewers claiming that he "goes too overboard with special effects" due to his versions of the Transformers and Teenage Mutant Ninja Turtles.

That's enough! I've heard enough crap from all of you!

Why don't I come down there and show you what a real star can do?

I swoop low with the telephoto; no Bruckheimer, I work solo.

If there's one thing I've learned, bitch, this game is about mother fucking money!

I make that dollar, y'all, mother fucking money!

I set up shop and got a few drops of that Got Milk money!

Rose to The Rock, now I got that socks made of silk money!

I ain't got that guilt money! I don't give a fuck!

I take my checks to the bank, and I sign 'em with my nuts!

I give the people what they love, while the critics say I'm evil!

Got no time to read reviews while I'm working on the sequel!

Got a gift from above and the eyes of an eagle!

When it comes to blowing up, no director is my equal!

Bay hanging underneath a helicopter 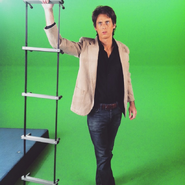 Bay in front of a green screen posted on Betette's Instagram account
Add a photo to this gallery
Retrieved from "https://epicrapbattlesofhistory.fandom.com/wiki/Michael_Bay?oldid=1403179"
Community content is available under CC-BY-SA unless otherwise noted.