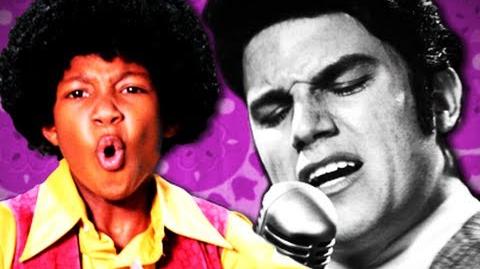 Bentley Green as the Jackson Five and Tootie Ramsey

Oooh! Elvis Presley as I live and breathe!

You stole rock and roll, gave us rockabilly cheese!

You dance like an epileptic, nothing but left feet!

I've seen it! Every record you set, man, I Beat It!

Here's a tip: don't swallow a bucket of drugs,

So you won't die on the toilet dropping hunks of Burning Love!

Call me Ed Sullivan, shoot you from the waist up!

Watch me moonwalk and I step on your blue suede!

Even in death, I go platinum on Blu-ray!

Spitting out hits since I was six years old!

Well, I died on the shitter, but I don't give a crap!

You ain't got half the badass battle raps that I have!

I got one for your monkey, two for your clothes,

Three for your family, and four for your nose!

'Cause all you wanna do is teach kids the birds and the bees!

This is the big time, Jacko! No dress rehearsal!

I'll light you up like your hair in a Pepsi commercial!

I can tell you're angry, but I can't comprehend it.

I stole from black culture. Why are you offended?

Your daddy beat gold records out of you like alchemy!

Don't make me spank you and dangle your ass over a balcony!

Ohhh, it's about time for a Thriller!

I'm going Off The Wall! I won't stop 'til I get enough!

Whooping your big fat ass with my shiny glove!

How you gonna talk about the birds and the bees

When you met your own wife when she was only fourteen?

Then you made one daughter; she (ah!) came to me.

I took her to my Neverland Ranch to Hee-Hee!

You shoulda stayed in the army, dude!

Shamone, even Tito looks better than you!

There's only one crown, baby. Let the one King rule!

You're a creeper, dude. You like to grab your own wanger!

I only let you marry my daughter 'cause I knew you'd never bang her!

You think you're tough? Man, you look like Tootie!

I was badder than you in my Blue Hawaii movie!

You lost your damn mind: that's why they cast you in The Wiz!

You're like a sad white woman who never got to be a kid!

I'm out, before you try to hold me and free your willy!

I've seen it! Every single record, I Beat It! 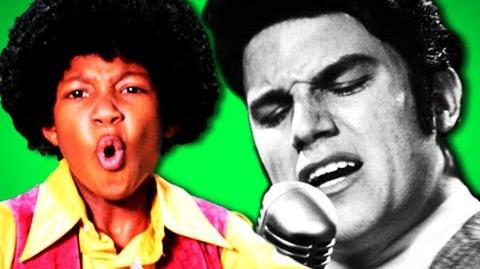 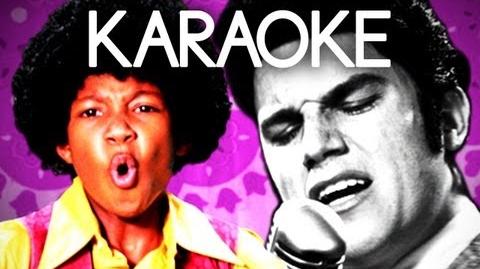 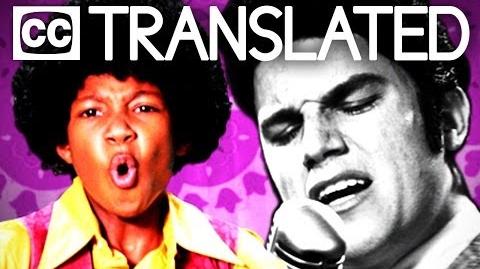 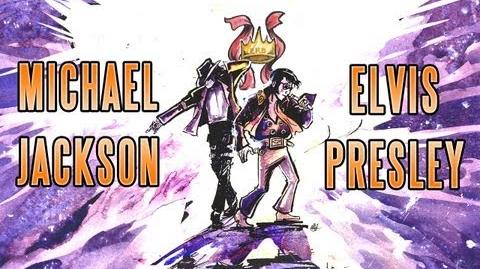 MICHAEL JACKSON vs ELVIS PRESLEY - EPIC DRAWING OF HISTORY!
Add a photo to this gallery
Retrieved from "https://epicrapbattlesofhistory.fandom.com/wiki/Michael_Jackson_vs_Elvis_Presley?oldid=1493808"
Community content is available under CC-BY-SA unless otherwise noted.