Michael Jeffrey Jordan, also known by his initials, MJ, was born on February 17th, 1963 in Brooklyn, New York. He is a former basketball star who led the Chicago Bulls to six NBA championships and won the Most Valuable Player award five times. He is often considered the greatest basketball player in the history of the NBA (National Basketball Association).

Due to his skill on the court, he made basketball very popular around the world during the 1980s and 1990s. He has his own line of Nike shoes, called Air Jordans, and is also a regular on the Hanes Underwear commercials. In 1984, Jordan was drafted by the NBA's Chicago Bulls, where he quickly became a league star.

In 1993, he announced his retirement from the NBA. After this, he played baseball for the Birmingham Barons, an affiliate of the Chicago White Sox, and batted a .202 average. In 1995, he announced he was returning to the NBA. A year later, he starred in a movie with the Looney Tunes cast titled Space Jam.

In 1999, he was deemed the greatest North American athlete of the 20th century by ESPN. In 2009, he was inducted into the Basketball Hall of Fame.

Why don't you dodge this battle like you did Vietnam?

'Cause you've got as much chance of beating me as LeBron!

I'm a flying machine, like the world has never seen!

You can fight one man? I can drive through a whole team!

I choke a dope with his own jump rope!

You'll get smoked when I flow, you Kentucky fried joke!

Now you double dribble balls that nobody can see!

Man, you make me sick, but I'm better with the flu!

You should let the Fresh Prince do your rapping for you! (Swish!)

I would pass the mic to Pippen, but I'm not done scoring!

Stay all up in your grill like my name was George Foreman!

So Cassius wants to talk about cashing checks.

I'll school you through your bug spray, off your Broadway play, over the Japanese dude sittin' on your face!

Hit nothing but net! You ain't seen nothing yet!

Man, you needed a movement 'cause you're so full of shit!

I'm a better athlete and a better MC!

Battle me two more times, watch me get a three-peat! 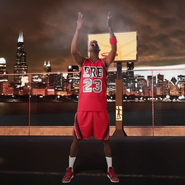