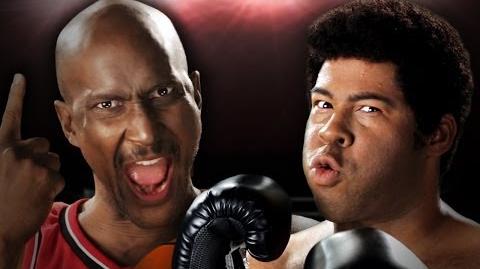 A basketball court
A boxing gym

Michael Jordan vs Muhammad Ali is the thirty-eighth installment of Epic Rap Battles of History and the fifth episode of Season 3. It features five-time NBA MVP, Michael Jordan, rapping against world heavyweight boxing champion and civil rights activist, Muhammad Ali. It was released on December 3rd, 2013.

Why don't you dodge this battle like you did Vietnam?

'Cause you got as much chance of beating me as LeBron!

I'm a flying machine, like the world has never seen!

You can fight one man? I can drive through a whole team!

I choke a dope with his own jump rope!

You'll get smoked when I flow, you Kentucky-fried joke!

Now you double dribble balls that nobody can see!

Flying through the air like a big dumb goblin!

You're the only Bull that's uglier than Rodman!

Messing with me is gambling: you got a problem!

When you came back a Wizard like Gandalf the Black!

You should've kept your ugly sneakers packed up on a shelf!

Stick to golf: you can keep the ball to yourself!

I'll whup your face back to your Hitler mustache!

Now your daddy got killed, and I feel for your family,

But your baseball career: now that was a tragedy!

Man, you make me sick, but I'm better with the flu!

You should let the Fresh Prince do your rapping for you! (Swish!)

I would pass the mic to Pippen, but I'm not done scoring!

Stay all up in your grill like my name was George Foreman!

I saw you slapping Reggie Miller. Boy, what's wrong with you?

You fight like the little girls who make your Nike shoes.

McDonald's and underpants as corporate backers,

You stay at the Ritz 'cause you sold out to crackers!

So Cassius wants to talk about cashing checks?

I'll school you through your bug spray,

Off your Broadway play, over the Japanese dude sitting on your face!

Hit nothing but net! You ain't seen nothing yet!

Man, you needed a movement 'cause you're so full of shit!

I'm a better athlete and a better MC!

Battle me two more times, watch me get a three-peat!

Beep beep! Why don't you back up that trash?!

I'll leave you like Liston: flat on your ass!

You need to bounce back to North Carolina, kid,

'Cause your rapping sucks more than Space Jam did! 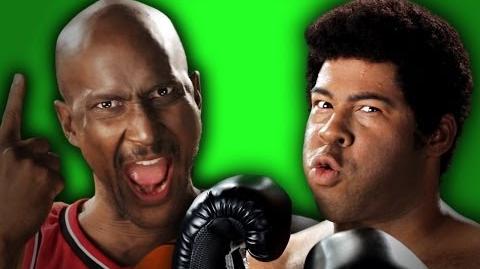 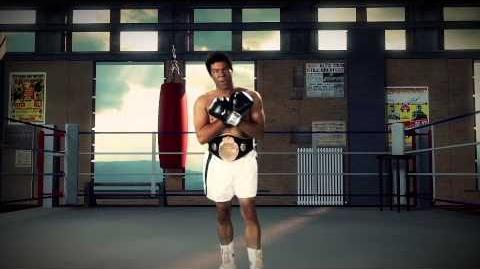 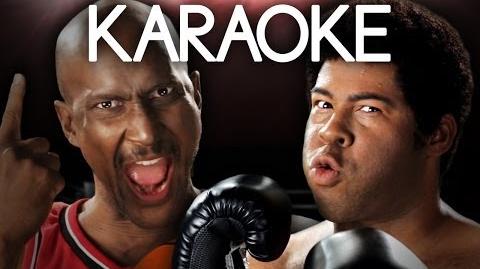 Retrieved from "https://epicrapbattlesofhistory.fandom.com/wiki/Michael_Jordan_vs_Muhammad_Ali?oldid=1493805"
Community content is available under CC-BY-SA unless otherwise noted.