Mikhail Gorbachev battled Rasputin, Joseph Stalin, and Vladimir Lenin preceding Vladimir Putin in Rasputin vs Stalin. He also made a cameo appearance through reused footage in Alexander the Great vs Ivan the Terrible. He was portrayed by EpicLLOYD on both occasions.

Gorbachev became a candidate member of the Communist party while he was in high school, but it was not until 1952, when he was at Moscow State University, that he was granted full membership. Gorbachev steadily rose through the ranks of the Communist league, being elected as the general secretary of the Communist Party in 1985. During his term as general secretary, he was engaged with U.S. president Ronald Reagan in a costly race to amass nuclear weapons in space. Gorbachev worked diligently to create reforms that he believed would improve the Soviet standard of living. By providing more freedom and democracy to Soviets, he strove toward "glasnost" and "perestroika"; openness and restructure. He worked toward establishing a market economy that was more socially oriented.

After the events of the Chernobyl nuclear power plant explosion in the Ukraine on April 26th, 1986, Gorbachev and Reagan signed the Intermediate-Range Nuclear Forces (INF) Treaty, the first-ever mutual agreement on nuclear weapons reduction. In 1989, Gorbachev organized elections that required Communist Party members to run against non-party members. On March 15th, 1990, the Congress of People's Duties elected him the first president of the Soviet Union. During his presidency, Gorbachev promoted more peaceful international relations. Through his peaceful negotiations with President Reagan, Gorbachev was also instrumental in ending the Cold War. He is likewise credited for his crucial role in the fall of the Berlin Wall and subsequent reunification of Germany.

For his excellent leadership and his contributions to the overall betterment of world development, Gorbachev was awarded the Nobel Peace Prize on October 15th, 1990.

Gorbachev, alongside Mikhail Baryshnikov, Rasputin, Vladimir Lenin, Vladimir Putin, and Joseph Stalin, appeared in Red Square during the line in Ivan the Terrible's first verse, "I'm the first Tsar of all of Russia!"

Did somebody say birthmarks?

Yo, I'm the host with the most glasnost!

Assholes made a mess and the war got cold!

Shook hands with both Ronalds: Reagan and McDonald's, no doubt!

If your name end with "in", time to get out!

I had the balls to let Baryshnikov dance, playa!

Torn down that wall like the Kool-Aid Man, oh yeah!

And you all need to learn how to handle real power!

You all need to learn how to embrace real power! 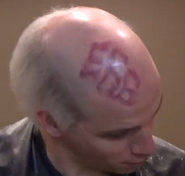 The original "ERB" birthmark idea seen in the Behind the Scenes 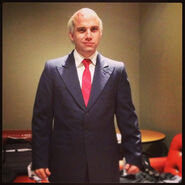 A picture of Gorbachev posted on EpicLLOYD's Tumblr account 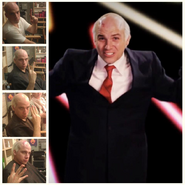 A collage of EpicLLOYD turning into Gorbachev posted on ERB's Facebook page
Community content is available under CC-BY-SA unless otherwise noted.
Advertisement