Fred McFeely Rogers was born on March 20th, 1928, in Latrobe, Pennsylvania. He was an American educator, Presbyterian minister, songwriter, author, and television host. Rogers was most famous for creating and hosting Mister Rogers' Neighborhood (1968–2001), which featured his gentle, soft-spoken personality and directness towards the audience.

Over the course of three decades on television, Rogers became an indelible American icon of children's entertainment and education, as well as a symbol of compassion, patience, and morality. He was also known for his advocacy of various public causes. His testimony before a lower court in favor of fair use recording of television shows to play at another time (now known as time shifting) was cited in a U.S. Supreme Court decision on the Betamax case, and he gave a now-famous testimony to a U.S. Senate committee, advocating government funding for children's television. He succeeded by doing nothing more than explaining himself quietly and politely and quoting one of his songs from the show. He died of stomach cancer at the age of 74 on February 27th, 2003, in Pittsburgh, Pennsylvania.

Rogers has seen something of a renewed interest in the fifteen-plus years after his death. In 2018, Won't You Be My Neighbor?, a documentary about Rogers' life by director Morgan Neville, grossed over $22 million and became the highest-grossing biographical documentary ever produced. In 2019, actor Tom Hanks portrayed him in the biographical film A Beautiful Day in the Neighborhood, based on a magazine interview conducted at the height of Rogers' career.

Hello there neighbors. My name is Fred Rogers. I'm so very glad that you're reading my bio. You're so very special to me. Children, did you know that I went to school to become a minister? Yup, but instead I started making a children's show out of my home in Pittsburgh. It started airing on PBS waaaay back in 1968. Isn't that wonderful? On my show, when I come inside, I always take off my work shoes, put on my sneakers and change sweaters. Now, doesn't that feel good? Sure it does. In my house I get letters delivered from my postman Mr. McFeely and I have a trolley that takes us to The Land of Make Believe! That's where King Friday, Prince Tuesday and Henrietta Pussycat all live. It's a magical place and I'm so glad I can share it with you. Thanks for reading my bio, I have to go now. But you know what? It's such a good feeling, a very good feeling. The feeling you know that I'll be back, when the week is new, and I'll have more ideas for you. And you'll have things you'll want to talk about. I will, too.

Mister Rogers briefly appeared on Pablo Picasso's television screen at the end of his second verse.

The only gold I keep is on the shelf in my Emmys.

Get right back in your van and get the fuck outta my neighborhood. 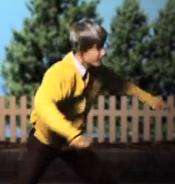