Mister Rogers' Neighborhood is an American half-hour educational children's television series that was created and hosted by Fred Rogers. The show was broadcast from February 19, 1968 to February 20, 1976, and again from August 20, 1979 to August 31, 2001, with the final episode taped on December 1, 2000. The series is aimed primarily at preschool children ages 2 to 5, but it was labelled by PBS as "appropriate for all ages".

The series had its genesis in 1954, when WQED debuted The Children's Corner, written and hosted by Mister Rogers along with Josie Carey. In 1961, a new a 15-minute program based on The Children's Corner, called MisteRogers, begin to air on CBC Television. The program aired on CBC for about four years. In 1966, Rogers acquired the rights to his program from the CBC and moved the show to WQED in Pittsburgh, where he had worked on The Children's Corner. He renamed the show MisteRogers' Neighborhood (later changed to the more-familiar title Mister Rogers' Neighborhood), which initially aired regionally in the northeastern US through EEN, including educational stations in Boston, Washington, D.C., and New York City.

The show incorporated the "Neighborhood of Make-Believe" segments from the CBC episodes. The adventures of the Make-Believe Neighborhood citizens appear in a short segment once in the middle of almost every episode. Rogers deliberately makes clear the distinction between the "real world" and the Neighborhood of Make-Believe by transitioning in and out of the Neighborhood segment via a distinctive red and yellow model electric trolley that enters and exits through small tunnels in the wall (or occasionally by setting up small tabletop models of the various Neighborhood of Make Believe buildings), and by discussing what had happened with his audience after the end of each segment. The same storyline continues for a week or more (similar to a soap opera), though Rogers is always sure to recap the plot for the audience.

Rogers covered a broad range of topics over the years, and the series did not shy away from issues that other children's programming avoided. The series dealt with competition, divorce, and war. Rogers returned to the topic of anger regularly and focused on peaceful ways of dealing with angry feelings.

Appearance in the rap battlesEdit

This is the location where Mister Rogers rapped. He can be seen both inside and outside of his house throughout both of his verses. In the beginning of his first verse and sometime during Mr. T's first verse, Mister Rogers was seen changing his shoes, similar to the show's intro. Mister Rogers can be seen outside of his house during his lines: "I'll be rocking sneakers till this battle's over," "on my penny loafers," "I pity your neck, Mr. Gold chains, you've got too many. The only gold I keep is on the shelf on my Emmys," and "when my plan comes together." He is also seen during Mr. T's second verse, dancing in front of his house. Mr. McFeely made his cameo appearance outside Mister Rogers' house as well at the end of Mr. T and Mister Rogers' second verses.

Mr. T was briefly seen in the Neighborhood of Make-Believe, along with Trolley the Train (as well as inside of Trolley the Train) when he said the line, "You couldn't even beat me in the Land of Make Believe!" 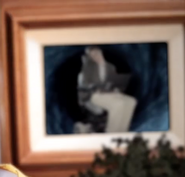 Stephen Hawking in Mister Rogers' house
Add a photo to this gallery
Retrieved from "https://epicrapbattlesofhistory.fandom.com/wiki/Mister_Rogers%27_Neighborhood?oldid=1476155"
Community content is available under CC-BY-SA unless otherwise noted.