The Monday Show is Nice Peter's (typically) weekly show/vlog on his second channel, NicePeterToo, which delivers news about the Epic Rap Battles, tours and his other projects. Sometimes hints to upcoming battles are shown. In one episode of the Monday Show, Nice Peter covered one of Queen's songs, indicating Frank Sinatra vs Freddie Mercury, while in another episode, Mike Diva was seen getting his Bruce Lee haircut, hinting at Bruce Lee vs Clint Eastwood. As of September 8th, 2014, the show went on an indefinite hiatus. He has released other videos titled the Monday Show, but intermittently and not to a set schedule.

Parts of The Monday Show

The Monday Show may contain some of the following segments: 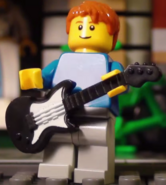 Twitter Question Time
Add a photo to this gallery
Retrieved from "https://epicrapbattlesofhistory.fandom.com/wiki/Monday_Show?oldid=1307661"
Community content is available under CC-BY-SA unless otherwise noted.