Epic Rap Battles of History Wiki
Register
Don't have an account?
Sign In
Advertisement
in: Actors, Behind the Scenes, Season 2,
and 2 more

Monica Weitzel portrayed one of Moses' honeys, alongside Elena Diaz, in Moses vs Santa Claus. As of January 27, 2013, she has become a member of this wiki (albeit inactive). Her account can be found here.

Monica Weitzel was born in Cali, Colombia. She has worked with many Music Artists/Producers including Dion Allen (Az Yet) RK Records, Styles of Beyond, as well as writing and singing on many local and underground rappers albums. She toured The U.S. and Mexico as a background vocalist for Platinum selling Latin Pop Singer, Noelia.

Monica also paired up with an established Production Company to create and produce her very own reality show, which sold to Mun2/NBC-Universal. Beauties & The Boss a show about her agency, aired in the summer of 2011. Just a year shy of coming off her reality show Monica landed her first role in a feature film called In Da Cut. She also appeared as the "Rent-a-Wheel" girl on comedian Gabriel Iglesia's DamnTv online show, prompting more appearances and collaborations and ultimately lead her to become the official "Fluffy Model" both on tour, online, and making an appearance in Iglesias's Stand Up Revolution Season 3 on Comedy Central.

She has since gone on to collaborate with other comedians such as David So, Timothy DeLaGhetto, Page Kennedy, and Ricky Shucks.

Monica Weitzel as one of Moses's Honeys 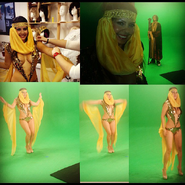 Monica Weitzel's pictures from Behind the Scenes 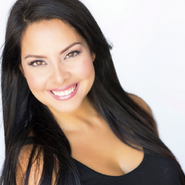