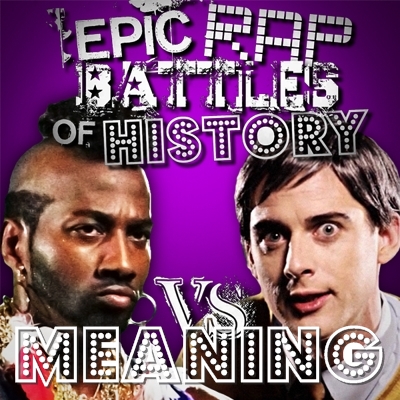 I pity the fool who tries to step to Clubber Lang!

(Mr. T's signature catchphrase is "I pity the fool!" His character in the 1983 film Rocky III is named Clubber Lang, a boxer with an arrogant attitude and the antagonist of the film, who was the only one able to K.O. Rocky Balboa. The phrase "I pity the fool" also originated from Lang, and it later became commonly used by Mr. T. He says that he'd feel sorry for anyone such as Mister Rogers to try to mess with someone as tough as Mr. T, as it would be a mistake to fight him.)

Call me B. A. Biceps 'cause I'll crush your whole gang!

(Mr. T's character in the 1980s television show The A-Team is B. A. Baracus, B. A. standing for 'Bosco Albert' even as the character claimed it was 'Bad Attitude'. He also says that due to his big-ass biceps (indicating his notable strength), he would crush Rogers and his friends.)

(King Friday, Prince Tuesday, and the neighborhood trolley are all characters on Mister Rogers' Neighborhood. Friday and Tuesday are puppets controlled by Rogers himself.)

And watch me dip their ass in gold, and wear 'em like my neck chain!

(Mr. T is known for his vast amount of neck jewelry, especially gold chains. He says he will dip all of Rogers' characters in gold and make them into chains so he can wear them on his neck.)

Sucka! I'll choke you with your own sweater sleeves!

(Mr. T says one of his usual words during some of his sentences, such as "sucka", "punk", or "fool". Rogers is known for his everyday clothing: a tie and a colored sweater. Mr. T warns him he will choke him with the sleeves of his sweater.)

You couldn't even beat me in the Land of Make-Believe!

(The Land of Make-Believe, better known as the Neighborhood of Make-Believe, is a fictional setting on Mister Rogers' Neighborhood, where most of Rogers' puppets live. Since the land is made up from Rogers' imagination, Mr. T says that Rogers wouldn't even be able to imagine, or make up, his own victory.)

Punk! I will Mr. T bag you in the closest cemetery!

("Teabagging" is actually a double meaning word. Mr. T might be meaning it as a wrestling move or a body-bag, but it is also known as a sexual term when a guy puts his balls in someone's mouth. Mr. T puts a spin on this by using the word T as the first letter in his name, saying he will be the one doing so and that he'll bury Rogers in the cemetery while he's at it.)

Nobody's gonna miss you 'cause all your friends imaginary!

(Rogers' friends come from his imagination, so Mr. T says Rogers is unimportant since he has no real friends.)

(This is a well-known greeting that Rogers gave to his viewers at the beginning of every episode of his television show.)

(Rogers changed his shoes after welcoming the audience to the program.)

(He began the show by changing from his penny loafers to his running shoes.)

(Rogers calls Mr. T ugly, and since he changed his shoes, no blood from the ugliness of Mr. T's face will get on his clean penny loafers. He also says Mr. T will be bleeding by the end of the battle.)

(Rogers said in many episodes, "I like you just the way you are." This is one of the many compliments he gave to viewers, and Rogers says Mr. T is a special individual because out of a million different people, he isn't like anyone else. This is a core component of Mister Rogers' Neighborhood—his appreciation and love for each and every person individually, without their needing to change to suit him.)

(A Brazilian is when you wax off the hair off a woman's pubic area and leave a small strip of it. Mr. T has a haircut inspired by African Mandinka warriors, but it looks as if a strip of pubic hair was left across Mr. T's head. This subverts the intent and message of the previous line: even though Rogers likes Mr. T "just the way he is," he still finds fault with his appearance.)

(Rogers thinks that Mr. T has too many gold chains and uses his "I pity the fool" catchphrase to demonstrate that the weight of those chains around his neck must be painful. Furthermore, Rogers may be associating the gold chains with extreme vanity or other traits he observes in Mr. T, but of which he doesn't approve. This also goes back to the idea that Mr. T doesn't need his gold chains to be a special person since he's special all on his own.)

The only gold I keep on the shelf is my Emmys.

(Rogers won many Emmy awards, which is an award given to those known for their work on television shows, as well as earning a lifetime achievement Emmy for his performance on Mister Rogers' Neighborhood. Unlike Mr. T, Rogers' gold is displayed on his shelf, whereas Mr. T only has golden jewelry around his neck to show off. This shows that Rogers worked hard to earn it, but Mr. T never won the award and bought his gold instead.)

(Rogers taught many children life lessons on his show. He is one of the most recognizable children's entertainers in the world, with many generations of children having watched his show and learning from it.)

(He says that Mr. T isn't very smart, and he had to shorten his name because he's too dumb to spell it.)

Who you calling dumb, fool? Mr. T only needs one letter!

(Mr. T denies that he is dumb like Rogers says, and he's so awesome that his name only needs one letter in it.)

Hello? It's for you: Bill Cosby wants his sweater!

(Bill Cosby is an African American comedian who was the star of the successful 1980s family sitcom The Cosby Show. Cosby is known for wearing colorful sweaters, like Rogers. Mr. T makes an "_____ called, they want their _____ back" joke by saying his sweaters were borrowed to him by Bill Cosby, and he wants them back from him.)

You're a 40-year-old virgin in a dumpy-ass house!

(Mr. T refers to the 2006 comedy film The 40-Year-Old Virgin, starring actor Steve Carell. Mr. T says that Rogers looks like the forty-year-old virgin in the movie: someone that nobody is interested in, and he lives in a lame house.)

I'll get Hannibal, Murdoch, and Face to stomp you out!

(John "Hannibal" Smith, H. M. "Howling Mad" Murdock, and Templeton "Face" Peck are all members of the A-Team, the action-adventure series in which Mr. T acted as B. A. Baracus, another A-Team member. He says he'll get his crew to finish Rogers.)

The only pussy cat you've ever seen is on Henrietta, sucka!

(Mr. T says that Rogers has never seen a woman's pussy, a slang term for the vagina. Henrietta the Cat is a puppet who lives in the Neighborhood of Make-Believe, and since pussy is another term for cat, he says Henrietta is the only "pussy" Rogers would have seen in his life.)

And your Mr. McFeely delivers a lot more than letters!

(Mr. McFeely is one of the main characters on Mister Rogers' Neighborhood and serves as Rogers' mailman. Mr. T says that Mr. McFeely visits Rogers so often that they may have a gay relationship together. This can also be implied due to his name being "McFeely", which sounds like someone who would feel on a person sexually, and McFeely was also Fred Rogers' middle name in real life.)

So before you come to battle with your PBS crap,

(In 1969, Fred Rogers spoke in the favor of the Public Broadcasting Services, or PBS, when they were on trial. PBS is also the network that broadcasts Mister Rogers' Neighborhood.)

How 'bout I call up CPS about them kids on your lap, fool!

(The CPS is the Child Protection Services, who protect children from strangers, pedophiles, or any type of criminal who wants to harm children. Basically, Mr. T implies that Rogers is a pedophile.)

(Kids love lunch, but they loved Rogers' show more. As a retort to Mr. T's last line, he says that he is not being pedophilic since kids enjoy watching the show.)

(Rogers refers to the short-lived Mr. T cereal made by Quaker Food Company that only ran in 1986 and claims it ripped off Cap'n Crunch. He also implies Mr. T's figure is only used on cheap advertising.)

(Hannibal, the leader of the A-Team, was famous for saying, "I love it when a good plan comes together." Their plans would normally succeed, so Rogers says that Mr. T won't even notice his secret plan of winning the battle.)

(Cool Runnings is a 1993 Disney comedy film starring many African-American actors including rapper Doug-E-Doug and actor John Candy. The film is about four Jamaican adults who want to form the first Jamaican bobsledding team to compete in the Winter Olympics. Rogers says he'll cut Mr. T into four black people and remake the movie with them.)

(Mr. T was born Laurence Tureaud, but adopted the stage name "Mr. T" to make himself better known as an actor. Rogers' tone here is used to sound authoritative towards Mr. T, especially by calling him by his first name, similar to a teacher or supervisor of a child.)

Get right back in your van and get the fuck outta my neighborhood.

(Rogers warns Mr. T to go back to the A-Team's van, which Mr. T usually drives, and leave his neighborhood for good. His uncharacteristic use of profanity shows that the otherwise-cheerful and friendly Rogers has finally lost his patience with Mr. T.)

(This lyric is what developed into the lyric, "I'll say this once, Lawrence. I hope it's understood." This came from a beta recording in which Nice Peter mistakenly refers to Mr. T as Terence, likely due to spoonerism in his moniker "T" and birth name Laurence Tureaud.)

Retrieved from "https://epicrapbattlesofhistory.fandom.com/wiki/Mr._T_vs_Mr._Rogers/Rap_Meanings?oldid=1474636"
Community content is available under CC-BY-SA unless otherwise noted.