Napoleon Dynamite battled Napoleon Bonaparte in Napoleon vs Napoleon. He was portrayed by Nice Peter.

Napoleon Dynamite is the eponymous main character of his 2004 comedy movie, in which he is portrayed by American actor Jon Heder. The movie has gained a huge cult following and has been very popular since. FOX aired an animated television series featuring Dynamite and characters from his movie, which only lasted a few months.

Dynamite is a teenager living in Idaho. He has a strange family and goes to school. He likes to draw fantasy creatures, like his favorite animal the "liger", and has many interests in ninjas, magic, mystical creatures, and medieval ages. He usually makes up stories about himself to make himself look "cooler", like that he knew secret ninja moves from the government. He usually says "gosh" when he gets annoyed and sighs a lot.

His family includes his older brother Kip, his grandmother, and their pet llama, Tina. He also has a uncle named Rico who during the movie, shows up to watch the boys while their grandmother is in the hospital. Dynamite has two friends: his best friend Pedro and his other friend Deb, who has a secret crush on him. Dynamite helped Pedro become the class president. At the end, Pedro won because of Dynamite's unique dancing he had learned himself throughout the course of the movie.

Gosh! I'm like, the best dancer in my entire school. And my favorite animal is the Liger, but you probably don't even know what that is. Yeah, I'm awesome, even though my house kinda sucks. I live at home with my lame Uncle Rico and my brother who, like, fell in love with this Lafawnda girl on the dumb computer. We've also got stupid Tina the Llama that I've gotta, like, feed all the stupid time! Geeze! Stupid Tina! It's like I gotta keep tater tots in my pocket just to get through the day. My friends are cool, of course. My one friend Pedro ran for president of our class and won, pretty much because I wore this flippin' sweet T-shirt telling people to vote for him. Pretty much everybody does what I say. I also have some sweet pictures of myself that my other cool friend Deb took. I'll probably, like, send them to GQ or something so they can put them on the cover.

Gosh! I can't believe how much of a little bitch you are!

Welcome to the battle of Waterloo, part two! (Yes!)

I got skills! I'll put you in a half Horatio Nelson!

You can keep your French fries; I got tater tots, you gnome!

'Cause this is a rap rollercoaster. You're not even tall enough to ride!

Dynamite on his liger 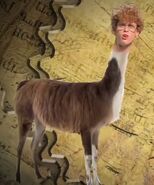 Dynamite as Tina the llama
Add a photo to this gallery

Retrieved from "https://epicrapbattlesofhistory.fandom.com/wiki/Napoleon_Dynamite?oldid=1450466"
Community content is available under CC-BY-SA unless otherwise noted.