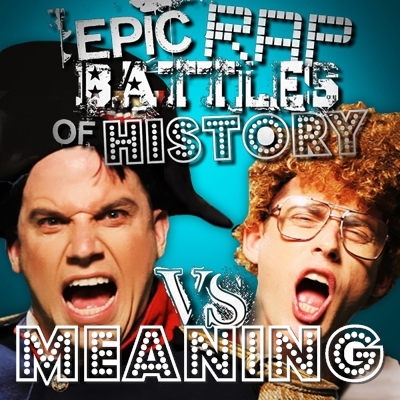 Gosh, I can't believe how much of a little bitch you are!

("Gosh!" is an iconic phrase often used by Dynamite. He says this because he cannot believe how short Bonaparte is, although his height is actually more known as a legend since he was measured in units different than the ones used in modern times.)

(Dynamite says that Bonaparte was a bad world leader and actually "lowered" the bar because he was so small.)

(A pun about Bonaparte's name sounding like "bones apart". Horses are used to make glue, and Bonaparte normally rode on a horse.)

Welcome to the battle of Waterloo, part two!

I got skills. I'll put you in a half Horatio Nelson!

(Bonaparte lost while trying to invade Russia. Boris Yeltsin was the first President of the Russian Federation, who caused the 1998 financial crisis. He also says that Bonaparte is as ugly as he is.)

You can keep your french fries. I got tater tots, you gnome!

(Dynamite's line insults Bonaparte's French heritage by using the popular food, French fries, which actually originate from Belgium. Dynamite goes on to say that he prefers a similar potato product, tater tots. In his film, he loves them so much that he asks other students at lunch for theirs, stuffs them in his pockets, and eats them in class later. He ends the line by calling Bonaparte a gnome, a small fantasy creature, which is another jab at Bonaparte's perceived height.)

(Escargot is the French word for snail, and snails are usually served to eat in France. Dynamite calls Bonaparte a snail and tells him to crawl home. Also a pun on saying he should "escar-GO the heck home.")

How dare you address moi, you adolescent worm!

(Bonaparte feels that Dynamite is not at the same level as he is. "Moi" is French for "me". Dynamite is a teenager, so Bonaparte insults him by calling him an adolescent worm.)

I am French! You are a buck tooth nerd with a perm!

(Bonaparte was born in France, a place known for its high culture. Therefore, he believes his opponent is not worthy against him since Dynamite was buck-toothed and known for his nerdy attitude and a weird curly hairdo.)

I spit at you harder than Tina the Llama,

(Tina the Llama is a llama from Dynamite's movie that often spits on him for comedic values. To spit in someone's direction means that you find them despicable. Bonaparte says that he will disrespect Dynamite better than Tina.)

Smacking your face till your lips swell up like Lafawnduh's.

(In the movie, Dynamite's older brother Kip had a black girlfriend named Lafawnduh, who happens to have large lips. Bonaparte says that he'll smack Dynamite's face until he gets swollen lips like her.)

Doodle up some friends, you gangly freak show,

(Dynamite normally doodled a lot, and Bonaparte says he should draw himself some friends since he has none. He also calls him an ugly freak.)

Before I toss you over the mountain like the dreams of Uncle Rico!

(In one part during Napoleon Dynamite, Uncle Rico offered to bet with Napoleon that he could throw a football over a set of mountains. Uncle Rico's dreams were also shattered in the past, so Bonaparte says he will make Dynamite disappear like Rico's dreams.)

This bastard's about to see how bad a battle can be.

(Bonaparte calls Dynamite a bastard, since the movie doesn't show that he actually had parents. Bonaparte has also been in lots of battles, so Dynamite has no idea what a real battle is like compared to him.)

After this, your buddy Pedro will be voting for me!

(In Napoleon Dynamite, his friend Pedro ran for class president, so Napoleon wore a shirt that said "Vote for Pedro". He says that even Pedro will vote for Bonaparte in this fight. It could also be a reference to Bonaparte's noted skill in bringing others to his side, famously convincing an entire opposing troupe of soldiers to join his side. He was also approved in his status as Emperor, by way of public vote.)

'Cause this is a rap roller-coaster. You're not even tall enough to ride!

(Most roller-coasters have a minimum height for someone to be allowed to ride. Yet again, Bonaparte is being teased about his short height.)

(Dynamite normally says "I don't even care" when he doesn't care about stuff. Napoleon killed thousands of Prussians during his time, but Dynamite claims that doesn't matter to him.)

(The lollipop guild was the name for the group of Munchkins from The Wizard of Oz, which were a group of tiny people. Dynamite is calling Bonaparte a lowly emperor and he can only be fit to lead midgets like them. This may also be referencing the Napoleon lollipop brand, named after him.)

(In English, this means, "God damn it! You have a head that can blow off manhole covers!" In other words, Dynamite's face is so ugly that sewer covers pop out in sight.)

I'm going to shove your moon boots straight up your poop shoot!

(Moon boots are Napoleon Dynamite's preferred footwear. Bonaparte is saying he's gonna kick his ass, or poop shoot, with his own boots.)

I'll whip you so bad, they'll make a virgin meringue!

(Meringue is a type of dessert in France made from whipped egg whites. In this context, Bonaparte says that he'll whip Dynamite, or, in other words, beat him. The virgin part is saying that Dynamite has never had sex.)

You're the only type of dynamite that's never going to bang!

(Dynamite makes a "bang" sound when it explodes. To bang someone also means to hump sexually, and as Bonaparte said Dynamite will remain a virgin, he says that he'll never get a girl to have sex with.)

(This lyric is what developed into the lyric, "I got skills! I'll put you in a half Horatio Nelson!")

(This lyric is what developed into the lyric, "You can keep your French fries; I got tater tots, you gnome!")

How dare you address moi, you insolent worm!

(This lyric is what developed into the lyric, "How dare you address moi, you adolescent worm!" "Insolent" is a word meaning to show a rude or arrogant lack of respect.)

(This lyric is what developed into the lyric, "Why don't you crawl back in your little shell and escargot the heck home?" Interestingly, the lyric was ultimately given to Dynamite instead of Bonaparte, originally calling Dynamite out as a social recluse (as to be "in your shell" means to be uncomfortable in social situations).)

This boney bitch about to learn how bad a battle can be,

(This lyric is what developed into the lyric, "This bastard's about to see how bad a battle can be." Bonaparte calls Dynamite a "boney bitch," or really lanky.)

Retrieved from "https://epicrapbattlesofhistory.fandom.com/wiki/Napoleon_vs_Napoleon/Rap_Meanings?oldid=1328101"
Community content is available under CC-BY-SA unless otherwise noted.