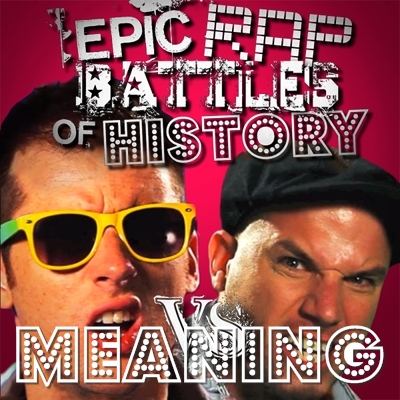 This is one vid, kid, that you won't ever survive.

(Nice Peter, at this point, had been in every single video of Epic Rap Battles of History prior to this one. The character he plays is usually regarded as the victorious party in the battle against the character Lloyd plays, but Lloyd says that here, his winning streak will be ended. Lloyd is three years older than Peter, so he is calling him a "kid".)

(Lloyd will defeat Peter, and then drop his subscription to Peter's YouTube feeds. To "dislike" a video on YouTube means you don't enjoy it, and the number of likes and subscribers usually determines a YouTuber's popularity.)

(Peter admitted in the Behind the Scenes for Darth Vader vs Hitler that he can't freestyle like Lloyd can, and he usually has to write his raps down so that he can make good rhymes. Lloyd taunts him that for now, he won't be a good rapper, and perhaps that he'll possibly get better in the future.)

(Peter produced his Monday Show on his alternate account, nicepeterToo, in which he formerly posted vlogs every Monday about his work and life, then answered fan mail and other questions. Before he uploaded them, he usually edited them. Lloyd tells him to stick to that for the moment, as it's all he is good at; he also insults the show.)

(Peter loves watercolor drawings, especially unicorns, which are considered to be his mascot. His fans sent them by the batch, and he posted them in-studio. Lloyd, however, will destroy and eat them.)

(Lloyd can see that Peter fears him by the way his body moves.)

You should start leaving. Look, your hair line's already retreating!

(Lloyd says Peter has no chance and should leave the battle. When the battle was released, Peter was balding, though he is still young, so Lloyd says that even his hairline is backing away from him. This is also slightly ironic, since Lloyd was eleven years younger than Peter when his own hair began balding.)

(Even though Nice Peter quickly rose to fame on YouTube, Lloyd thinks no one actually knows, or even cares about, who Peter is.)

(At the time, Peter was hosting ERB on his Nice Peter channel; thus Lloyd thinks ERB was the only reason people subscribed to him, since the Epic Rap Battles of History videos get a lot more views than a regular video Peter makes.)

(Lloyd admits he thinks it's impressive for Peter to have so much fame on YouTube, since his channel is currently over two million subscribers. Peter has thousands of fans and could continue making videos for some time.)

(Lloyd had thought of the original idea for the Epic Rap Battles of History, in which he said he and Peter should rap as historical figures for an improv show. Peter decided that instead of making it for a show, they could act it out for a YouTube series, and Lloyd collaborated with Peter for them ever since. However, because the videos are posted on his channel, Peter had earned more fame than Lloyd.)

(Peter gives credit where it's due and admits that Lloyd did think of the original idea for ERB, as he just stated.)

(Peter is claiming that he had the idea for Lloyd, who is much shorter than Peter himself, to play the more evil or arrogant character on most of the rap battles, with people such as Adolf Hitler, Genghis Khan, and Napoleon Bonaparte. This may also be another reference to the fact that the polls often pick Nice Peter's character as the winner over Lloyd's, with Peter calling Lloyd's characters portrayed the "bad rappers".)

(Peter calls attention to Lloyd and tells him how he sees him.)

You're a short little sidekick. I'll call you Mini-Me!

(Peter plays himself up as the star, with Lloyd as the shorter sidekick to his antics. Being short and bald, Lloyd sort of looks like Dr. Evil's dwarf sidekick Mini-Me from the Austin Powers movies as played by Verne Troyer, a dwarf actor who was 2' 8".)

(Lloyd's most famous role in the season was a dead-ringer Hitler in Darth Vader vs Hitler.)

(Jabbing at Lloyd's appearance yet again, Peter says that without the Hitler mustache, Lloyd resembles Bette Midler, an actress with a similar face type.)

(Peter is taller than Lloyd, but despite this, Peter normally has to have some help from Lloyd, who he ironically looks up to.)

(Peter's first job in comedy was in the Improv theater that Lloyd runs, Mission IMPROVable, when he was just arriving to Los Angeles years ago. Had it not been for Lloyd taking Peter on, Peter wouldn't have a gig in comedy.)

(Peter offers his retort, saying he was the lyricist who made Lloyd famous. Lloyd normally sings the chorus for Peter's songs, and his parts usually have him yelling.)

(Peter says Lloyd can't even carry a tune, nor can his character, Chuck Norris, from Abe Lincoln vs Chuck Norris, because Norris is only an actor and martial artist, not a musician. Peter also refers to Norris' line which he used to start his final verse, "I am Chuck fucking Norris!")

(Lloyd fires back at Peter's claims that he's the better musician. He says he's just stretching the truth, that he's not as talented as he claims to be.)

(Lloyd alleges that 87 of Peter's songs follow a repetitive pattern of chords that demonstrates a lack of musical skill.)

(Lloyd is short and bald, similar to a thumb. He also says Lloyd just sort of came out of nowhere because before the battle, people didn't really know who Lloyd was.)

(Lloyd is also compared to Gollum, the twisted creature from the Lord of the Rings franchise. Gollum is balded, short, and has big feet, so Lloyd would look similar to him, but unlike Gollum, he's pudgy.)

("Superman Socks" is one of Peter's songs. Lloyd says he's going to beat Peter so hard, he'll knock him right out of his socks.)

(KassemG is a YouTuber who is friends with Peter and Lloyd, and they all worked together at Maker Studios (now Disney Digital). Lloyd says he only got the leading role for ERB because he kissed up to KassemG.)

(Peter thinks it was uncalled for Lloyd to say that.)

(He decides to quit this battle, and also says he quits ERB in general...until KassemG comes down on his wolf and tells him not to quit, but instead, he should make another season.)

Retrieved from "https://epicrapbattlesofhistory.fandom.com/wiki/Nice_Peter_vs_EpicLLOYD/Rap_Meanings?oldid=1472590"
Community content is available under CC-BY-SA unless otherwise noted.