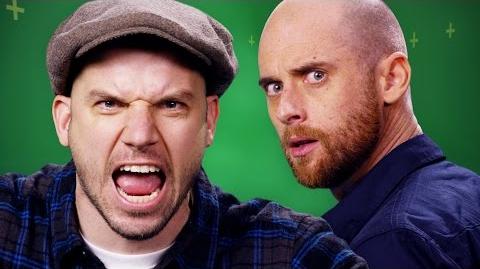 Nice Peter vs EpicLLOYD 2 is the seventieth installment of Epic Rap Battles of History and the twelfth and final episode of Season 5. It features the co-creators of the series, Nice Peter and EpicLLOYD, rapping against each other in a rematch of the Season 1 finale. It was released on January 9th, 2017.

[Note: Nice Peter is in blue, EpicLLOYD is in orange, Allrounda Beats is in bold, and the ERB Crew are in regular text.]

Hey, can you put that little, uh, thing back down in there?

You're just a little up in my face right now.

Oh, I'm sorry. Am I being annoying?

Look, I don't know how to say this.

You know what, fuck it. Let me just fucking say it.

I'm fucking burnt out, man! It's been six years every day

That I wake up and come to work to look at your hungover face!

I need some personal space to get away from your screaming,

But every time I turn my back, mother fucker, you start scheming

To take over control of some shit I'm already doing just fine!

I try to take our little baby in a creative direction!

I'm trying to make art, mother fucker; you're trying to find a rhyme for erection!

You're second class! That's why I let you run ERB2!

You're so afraid to lose, but losing's all you do,

And tonight, I'm not quitting the battles! Bitch, I'm quitting you!

Quit me then, you pussy! We'll see what happens!

I'll sit back and watch you unravel and revel in pure satisfaction!

I'm out of compassion for you and your self-righteous bullshit!

I'm sick of smoothing things out! The same routine!

ERB2 is right! I'm covering your ass behind the scenes,

And then I try to tell you things, but you're too stubborn to understand!

Like, dude, that is not a cool way to play Batman!

You manipulate your friends, and then you throw them away!

I don't know who you shit on worse: myself or Dante!

But I'm not an entrée at one of your fancy restaurants,

So quit eating up my time picking one of your fancy fonts,

And make a fucking decision so all these people can leave!

Excuse me for interrupting Rocket League and smoking weed!

They got places to be, and now they're looking at me!

Nice Diva is my new name for you, Nice Pete!

Your jokes haven't grown since you told them in a lunch line, bro!

You're an eight-year-old boy stuck inside a whatever-year-old man!

Rap about my problems instead of solving them!"

If you wanna heal, you gotta deal with your issues 'cause a bottle's not stopping them!

Don't take this battle there, dude. You don't want that at all!

Let me guess: right now you're on two beers and a pill and a half of Adderall,

And that makes you obsessive, and then you fuck up all the fun,

So why don't you trust the editors and stop changing their shit after they're done?

Yo, don't try to paint me as some compulsive little jerk!

If you weren't so cheap, we could hire some editors that do good work!

Who do you think just— Oh, that's real funny, Andrew!

Who the fuck left the tag in?

[Off-screen viewer clicks the like button on the video.]

Hey, Allrounda. Can you put the—

Yeah, and the little, uh, nice.

Yeah. I guess so.

Okay, I've got the card. Did you dump it?

Get your mark. Quiet, please! Here we go!

Yo, I guess what I'm saying, man, is that I'm running out of patience, man!

I'm a patient man, but sometimes you need to be a patient, man!

I got the same shit that I was dealing with at the very beginning!

I'm trying to get somewhere with it, man, but all your bitching is keeping my wheels spinning!

I've fought with my wife and gone under the knife,

And I've taken years off of the back of my life!

Man, since right in the beginning we been fighting! No one's winning!

People would kill to do what we do for a living! Your bitching is keeping my wheels spinning!

That was weird. Yup.

I'm sorry about some of the things that I said.

I'm sorry about the way you played Batman.

I think I just need a break. Yeah, me too.