Friedrich Wilhelm Nietzsche was born on October 15th, 1844, in Röcken bei Lützen, Germany. He was a German philosopher, scholar, and cultural critic. His works are strongly associated with critical analysis of religion, philosophy, psychology, and morality, and promote atheism, psychologism, and historism. His most known key ideas are: the "Übermensch" (or "Superman"), a goal for humanity to set for itself and that God is dead, killed by ourselves as a race. As a writer, he wrote several books such as The Gay Science and The Antichrist. Nietzsche's ideology was also noted to be very nihilistic and he is believed to have created the ideals of Nazism. However, many of his ideas that formed the backbone of Nazism were actually modified from his original works by his sister, who reworked them to fit her own ideology. In 1889, he had a mental breakdown and was committed to a mental asylum where he spent the rest of his life. He died at the age of 55 on August 25th, 1900, in Weimar, Germany.

[Note: Nietzsche is in brown, while Socrates and Voltaire are in regular text. All philosophers rapping together is in italics.]

Now that we've covered the two Yin and Yang twins, I can move onto Jackie Chan!

And I'll end any mother fucker like my name in a spelling bee!

While even your descendants seem a bit disoriented! 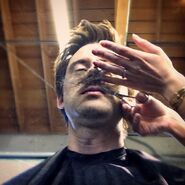 Nice Peter getting a mustache to portray Nietzsche

A picture of Nietzsche along with Socrates and Voltaire photographs in frames posted on ERB's Instagram account
Community content is available under CC-BY-SA unless otherwise noted.
Advertisement