Nikki Fancy is a producer, costume designer, and former member of the Epic Rap Battles of History crew. She worked as a costume designer for Darth Vader vs Hitler, as well as a producer for five episodes, from Sarah Palin vs Lady Gaga to Genghis Khan vs Easter Bunny. Fancy was also credited as one of the two additional girls' voices in Dis Raps For Hire - Episode 2. 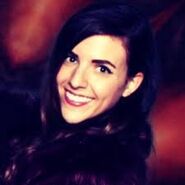 Fancy's Twitter avatar
Add a photo to this gallery
Retrieved from "https://epicrapbattlesofhistory.fandom.com/wiki/Nikki_Fancy?oldid=1228357"
Community content is available under CC-BY-SA unless otherwise noted.