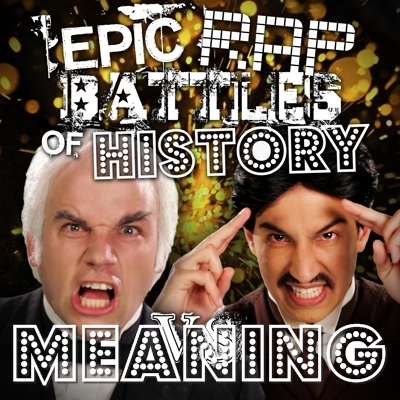 (Alternating current travels using Tesla's creation: a "step-up" mechanism that created the high voltages allowing electricity to travel long distances. Edison is playing on words with the common rap phrase "step up", and saying that Tesla must step up to his game as his current flow does. Also a play on words about how Tesla would be shocked, or amazed, at how Edison spits his electrical raps.)

(Edison is famous for being a prolific inventor, having over 2,000 patents to his name. However, historical evidence suggests that he copied and ripped off other people's work, as well as stealing Tesla's patents and adding it to his; thus, to "rip your style" means he'll destroy his style and steal it at the same time.)

(When Tesla left Edison's company, he was left with a job where he dug ditches and burned bridges for a living. "Digging ditches" and "burning bridges" are also commonly used sayings meaning "to make a bad situation worse for yourself" and "to destroy a connection or partnership with another party" respectively.)

(Edison "made" inventions when Tesla was away, while earning money from it since he was business-minded. Tesla was also very fond of pigeons. He would give them food and treat them like humans; he even fell in love with one.)

(Edison calls Tesla a science nerd with obsessive-compulsive disorder. Tesla was known to have OCD; he didn't like to shake hands with people, touch hair, and he was also obsessed with the number 3 – one instance being Tesla demanding to use exactly 18 napkins because 18 is a number divisible by 3.)

(Tesla believed that if he had sex with someone, it would get in the way of his true passions, so he was celibate [though it is unclear whether he was really a virgin - there are some sources which claim that he entered celibacy at around the age of 30]. To be "screwed" can mean having sex or getting beaten by someone. Edison says he beat Tesla by stealing his inventions and leaving him broke. It is also a pun on "screwing" in a lightbulb, or putting it in.)

I don't alternate my flow. I diss you directly!

(During the War of the Currents, Edison would convince people that his "Direct Current" is better than Tesla's "Alternating Current". He demonstrates that his flow is superior by saying that rather than "alternating" his current, he disses Tesla "directly".)

(Tesla wanted everyone to have free infinite energy. He would see how devices are made and see how he would build something without even a need for blueprints. He also knew that there was an infinite amount of electricity in the world and because of this, he believed that power could've been free for the world in the future.)

But no potential for threat from this enemy,

(Potential energy is a form of energy, which is used here to show that Tesla could see everything, but he could see no danger from his adversary, Edison. "Electric potential" is also another term for voltage.)

(Tesla, due to his OCD, always kept himself well dressed and spotless. His friends would always address him as "impeccably dressed".)

Giving lessons in electrical nemesis; this will be on the test,

(Tesla knew a lot more about electricity and science than Edison, who was just a businessman, but a remarkable inventor. He says he'll teach Edison how to use electricity properly, knowing that Edison wouldn't be able to pass a test on it, since Edison is a high-school dropout who failed grade school.)

So confess to your thefts, and let the whole world know

(Most of Edison's inventions were either stolen or improvised versions of other inventions, and the people back then never knew this.)

(Tesla was an ethnic Serbian, born in the Austrian Empire, in the region which is now modern-day Croatia. Most of Edison's inventions were made in Menlo Park, New Jersey, so he was dubbed "The Wizard of Menlo Park". Also, Tesla served as Edison's assistant for a while.)

(After more people found out the truth behind Edison, they realized Tesla was the true inventor, but this isn't listed in some history books. Therefore, Tesla believes he's gaining supporters and having the real story behind them fixed. Reddit is a website that allows you to post stories, pictures, ideas, etc. Its users are very supportive for Tesla. "Reddit" is a pun on read it, meaning Tesla read the current history, and now it needs to change.)

Your best invention was a way to steal credit!

(Edison's best invention, the lightbulb, was not actually his invention. It was created by ten other people, but Edison is the only one to be credited for its creation. Edison was also a driving force behind the present American patent system, used by inventors to protect their works from unauthorized re-creation and sale. Unfortunately, the system is flawed enough that the first inventor to file is awarded a patent, even if others may have developed the same idea before him. Tesla calls Edison out on seizing his patents from others.)

(Pun on the word "hurts". The Hertz is a unit of frequency, with 1 Hz describing a wave that oscillates one time in one second. Tesla was also a broke man; he died penniless and in-debt. Edison tells him to accept the fact that he's forgotten. At this point in the video, Edison puts wires on a dog to electrocute it. This is a reference to experiments Edison conducted, where he killed many animals (usually pets he stole) to show how dangerous alternating current was so that people would choose direct current instead. He is particularly known for conducting and overseeing the execution of Topsy the Elephant, as well as convicted murderer, William Kemmler, to prove this.)

(Tesla would typically envision inventions in his mind fully before building them. Edison was greedy, inventing things for money rather than the benefit of the world, so he never cared about Tesla's ideas if he couldn't profit from it.)

I conduct business, understood things you never could!

(Tesla didn't do well as a businessman, but Edison understood business very well. Another play on words with electricity, he conducts business like electricity conducts to metal material, meaning he's successful at connecting to it.)

(Edison's inventions made New Jersey a glimmering city of light. New Jersey now is noted for its horribleness, and a common stereotype is that people from New Jersey are stupid, so Edison claims his fame left a positive impact on it.)

(Edison invented the phonograph, the basis for later record players; his "records" were wax cylinders. From this sentence, he says he's "on the record", which means he's acting as a DJ. Edison admits he tricked Tesla by saying he got "duped".)

And I'll bet you fifty thousand dollars that you'll never forget it!

(Edison once said to Tesla that if he could fix the electrical problems with his company, he would give Tesla $50,000. Tesla managed to fix it, which shocked Edison. In return, Edison replied, "Tesla, you don't understand our American humor," and did not give him 50,000 dollars. Nikola Tesla also had an eidetic memory, which means he could remember anything he saw—a "photographic mind"—and he probably wouldn't have forgotten being tricked by Edison.)

Without me, here's a taste of what this battle would be:

(Edison prepares to show Tesla what the battle will look like if he didn't contribute to his inventions.)

[The screen goes black, and the beat stops.]

(Edison is claiming that without him, the lightbulb, the camera, and the microphone wouldn't have existed.)

(Tesla says that Edison could not diss him with his raps. He knows someone would have eventually created the things he had done, so he doesn't deserve to be boasting. This is also seen visually as a retort: Edison claimed without him, the lightbulb and other inventions wouldn't even exist, in which Tesla responds by lighting a lightbulb of his own.)

(Tesla's inventions were always ignored due to business-minded people saying that it would not profit. After Tesla quit working for Edison because of his disagreement, Edison stole some of his work to claim it as his own.)

What's inside mine was ahead of its own time.

(Tesla's inventions were way ahead of their time; no mere man of that century could have thought of his inventions. It is said Tesla had invented the future.)

(Edison did not just steal Tesla's inventions, but Edison just stole these inventions from humanity, which could have been used for them. This is also a play on a famous line from Edison: "A famous person is often remembered for the ability to take from mankind rather than for his ability to give to mankind.")

It's the wireless transmission of truth,

(One of Tesla's final inventions was a wireless electrical transmitter. He is saying he'll wirelessly transmit the truth to people.)

(J. P. Morgan funded Edison, but Morgan had some complications with Tesla and Edison. Yet another play on words since "shocking" is also used here.)

(Tesla was very underrated; most people today and during his century did not know him and they credited Edison for his inventions. But if these people knew that Tesla would have a lot more for us such as free electricity and was stopped due to Edison, then people would finally stop crediting Edison and would curse him, "con" meaning a fraud. Areas in and around New York and New Jersey are served with their utility commodities (natural gas, water, and electric power) by Consolidated Edison, colloquially "Con Ed" or "Con Edison".)

Retrieved from "https://epicrapbattlesofhistory.fandom.com/wiki/Nikola_Tesla_vs_Thomas_Edison/Rap_Meanings?oldid=1452580"
Community content is available under CC-BY-SA unless otherwise noted.