Odin made a cameo appearance in Zeus vs Thor. He was portrayed by a Lego Minifigure.

Information of the cameo

Odin is a major god in Germanic mythology, especially in Norse mythology. In many Norse sources he is the Allfather of the gods and the ruler of Asgard.

"Odin" is generally accepted as the modern English form of the name, although, in some cases, older forms may be used or preferred. His name is related to óðr, meaning "fury, excitation", besides "mind" or "poetry". His role, like that of many of the other Norse gods, is a complex role. Odin is a principal member of the Æsir (the major group of the Norse pantheon) and he is associated with war, battle, victory, and death, as well as wisdom, Shamanism, magic, poetry, prophecy, and the hunt. Odin has many sons, the most famous of whom is the thunder god Thor.

Odin initially appears in the background of Thor's title card, where he can be seen sitting on his throne. He then remains in the same position throughout Thor's first verse on Asgard. 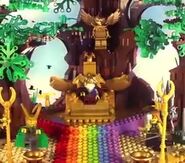 Odin on his throne 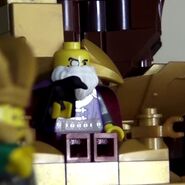 A better look at Odin in the Behind the Scenes

A better look at Odin's throne
Community content is available under CC-BY-SA unless otherwise noted.
Advertisement