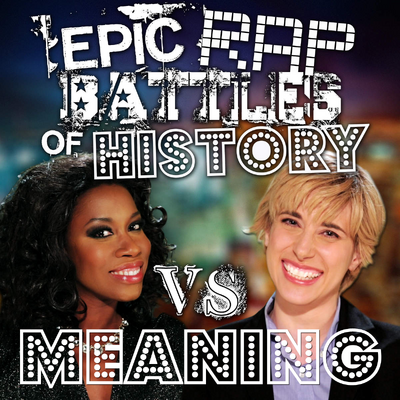 (Ellen makes a reference to a famous skit she did on The Johnny Carson Show where she talks to God on the phone and asks him questions.)

How do I tell my friend Oprah she's gonna get more whipped than Stedman?

(Stedman Graham, Oprah's boyfriend/husband, was brought to fame exclusively for being Oprah's partner. "Whipped" is a slang term for when a guy is being completely controlled by his girlfriend. Ellen implies Oprah is controlling, but how she will control Oprah in this battle.)

I'll make her head spin! When it comes to rhymes, I got a penchant!

(Ellen claims to have a penchant, or an affinity, for rapping, so she'll make use of it to confuse Oprah, or "make her head spin" with her verses.)

So if battling me is your intention, I better mention; you're 'bout to get licked by a lesbian!

(Ellen warns Oprah that if she wants to win the battle, she'll have to understand that Ellen is a lesbian. "Licking" has many meanings; quite a few relate to sex. However, a more obscure definition fits in this context: to "lick" someone means to smack them, so Ellen says she will beat Oprah.)

(Oh!) I'll knock you off your throne; take a shot at everything you OWN!

(Oprah has often been nicknamed the "Queen of All Media" because of her reach and influence within the industry and her effect on viewers. Queens often sit on high thrones as a mark of their rulerships, but here, Ellen says she will take her down from her position. The capitalization of "OWN" is a play on the Oprah Winfrey Network (OWN), which Winfrey launched in January 2011.)

I got the skill to make Doctor Phil say,

(Ellen claims her rapping is so good that Dr. Phil will advise Oprah not to mess with her.)

I think you better just leave her alone.

(Dr. Phil is a trusted television psychologist known for helping people with family issues, and is a friend of Oprah's. Ellen's rapping is apparently good enough for someone as intelligent and trustworthy as Dr. Phil to advise not to mess with her. He delivers this line in his customary matter-of-fact voice.)

You can tell Rachael Ray that my favorite recipe is

(Rachael Ray is a television cook whom Oprah helped become more well-known. Ellen is ordering Oprah to tell her what she will state in the next line.)

Chopping Oprah Winfrey up into a million little pieces!

(Ellen claims that she will metaphorically cut Oprah into bits. Additionally, it is a reference to A Million Little Pieces, an autobiography about the life of a drug dealer named James Frey that was later revealed to be a hoax. Oprah extensively promoted the book and was infuriated when she discovered the truth.)

I'm the queen of TV, and I'm here to destroy ya,

(Oprah asserts that she is the queen of television talk. She's recognized as a major personality across the globe. She is preparing to use her considerable star power to crush Ellen.)

So check under your seat because I've got something for ya!

(In many of her episodes, Oprah would give the members of her audience gifts under their seats, her most famous gifts being car keys. She says that Ellen should check under her seat (her butt) because she's got something (a foot) for her.)

(Oprah states Ellen will never reach her status as one of the most powerful and well-known people in the world.)

(Oprah and spiritual guru Deepak Chopra made a 21-Day Mediation program together. Deepak Chopra sounds like "Deepak Choke Ya," thus, Oprah makes a pun on it by saying she will choke Ellen.)

Girl, your show's a petting zoo; you do a week on kittens,

(Oprah states that Ellen's show is mostly about cute animals such as kittens, then mocks it by calling it a petting zoo.)

(Ellen voiced Dory, a fish in the 2003 animated movie Finding Nemo. Dory suffers from short-term memory loss in the movie, which is often a symptom of brain damage. Oprah was nominated for various movies like The Color Purple and The Butler. While Oprah's films were critically-acclaimed dramas, Ellen's roles are in comedies. Thus, Oprah calls herself the better actress of the two.)

Name's synonymous with power: spell it forwards or backwards!

(Oprah states not only that she has power to her name as it is, but how her production company, Harpo Productions, has power as well. "Harpo" is "Oprah" spelled backwards, hence the name.)

Yes, you've got that power (power!), and yes, I've got those kittens! (Kittens!)

(Ellen mockingly agrees that Oprah is a powerful person, saying she finds her to be too serious, and also agrees that she features kittens on her show, showing how happy and joyful she is in comparison. Ellen possibly references Will.i.am and Justin Bieber's song "#thatPOWER", in which a line of the song is "I got that power". This could also be a reference to how Will.I.Am and Oprah are close friends in real life.)

(Ellen often features puppies and clothing on her show. One of her recurring guests is British YouTuber Sophia Grace Brownlee, who was first found at age 9 covering "Super Bass" by Nicki Minaj. Since her appearance on Ellen's show, Sophia Grace has become an accomplished singer and actress. This is also a potential reference to The Puppy Episode of Ellen's sitcom when Ellen's in-show character and she herself went public about her orientation.)

(Unlike Oprah, whose show featured both serious conversation and niche topics like fashion and celebrity buzz, Ellen says that she prefers to feature things that make audiences happy.)

Make everybody feel good for a while!

(Ellen's show is meant to be an uplifting one, continuing the line above.)

Do a little dance and the crowd goes wild!

(Ellen objects to Oprah's statement as fans tend to applaud or 'go wild' when she dances.)

Kick you right back to the Miracle Mile!

(The Miracle Mile (actually The Magnificent Mile) is a stretch of Chicago's Michigan Avenue named for the buildings residing there. Oprah's studio was located in Chicago, and Ellen wants to send her back there.)

I thought I told ya, your daytime reign is over!

(Ellen reminds Oprah that although she is very powerful, she's already a thing of the past, as her show ended after a 25-year run in 2011.)

I'm jumping over Oprah like I'm Tom Cruise on a sofa!

(In May 2005, actor Tom Cruise appeared on Oprah's show and excitedly jumped on her sofa in response to his love life with now ex-wife Katie Holmes. The incident was one of Oprah's most notable moments.)

From ABC to LGBT to NBC, and now it's all me!

(ABC and NBC are television networks where Ellen's shows have been aired/mentioned. ABC aired Ellen's first show, simply named Ellen, where she famously came out in 1997. NBC has aired Ellen's talk show since 2003. LGBT is an acronym for Lesbian, Gay, Bisexual and Transgender, a group that Ellen admitted being part of. She also says that since Oprah has retired her show, she is now unmatched.)

I'm the best emcee and the biggest star,

(Ellen has been well-received as the Master of Ceremonies (emcee) at several Oscars ceremonies, most notably in 2007 and 2014. She has also built a significant reputation in her own right. She's been a spokesperson for CoverGirl Cosmetics and American Express and a guest judge for one season on American Idol, to name a couple achievements.)

And I'll bite you in the ass like the tax on a free car!

(During a September 2004 taping of her show, Oprah gave a Pontiac G6 car to every member on the audience. However, those in attendance weren't told that if they kept their cars they would have to pay federal and state taxes totaling almost $12,000 per vehicle. That fact 'bit them in the ass', meaning that it surprised and shocked them at the moment it came to light.)

(Oprah says that Ellen raps statements that she cannot back up. A mullet is a haircut that is short at the front and sides and long in the back, which is a hairstyle that Ellen normally wears. A mullet is also a fish, which could be referencing her role as Dory in Finding Nemo.)

(Oprah was known to talk at length about fashion, such as shoes. Ellen often dresses in a suit, which is something a man is more often known to do. Oprah threatens to kick Ellen's behind with her heels on, mocking her perceived masculinity at the same time.)

(Oprah says that without her own recognition, Ellen wouldn't be famous, and she follows Oprah's success methods. She also references the Oprah Book Club book The Road by Cormac McCarthy, whom she conducted her first ever interview with.)

You drive behind me in a second hand Porsche!

(Oprah says that Ellen will always be trailing her in success, continuing the road metaphor by comparing her career to an expensive car that was already used. This is also a play on words between Porsche, the car brand, and Portia de Rossi, DeGeneres' partner. It could also reference the fact that de Rossi was married to Mel Metcalfe before Ellen, so she is married to someone that has married to someone else before, or "second hand".)

(Oprah is in the Fortune 500 due to all the wealth her success has brought. Because of this, she is a big staple in the media. In fact, she ranks as the only African-American woman billionaire as a result of her empire.)

(Oprah says she is so famous that she is in the social circles of popular figures such as the 14th Dalai Lama, Tenzin Gyatso, and President Barack Obama, interviewing the latter as a US Senator and later stumping for him during the 2008 presidential race. Both men were also two of Oprah's most notable interviewees.)

Try to beef with me, I'll make the whole market crash.

(To beef with someone means to start an argument. Once on her show, Oprah said, "I've been stopped cold from eating another burger!", referring to Mad Cow Disease and the Texas cattlemen who sued her for "false defamation of perishable food" and "business disparagement". This sent beef prices into a tailspin, costing the Texans $11 million. Later, Oprah successfully won the case.)

Honey, once you go Oprah,

(This line is continued by Stedman.)

You can't go back!

(A play on "Once you go [black], you can't go back," a phrase used in relationships to describe how African-Americans are stereotypically better than other races (usually in the bedroom). Stedman, finishing Oprah's line, says that once you watch her show, there's no returning.)

Retrieved from "https://epicrapbattlesofhistory.fandom.com/wiki/Oprah_Winfrey_vs_Ellen_DeGeneres/Rap_Meanings?oldid=1475987"
Community content is available under CC-BY-SA unless otherwise noted.