Pennywise battled the Joker in The Joker vs Pennywise. It was portrayed by EpicLLOYD.

Pennywise the Dancing Clown is the favored form of It, an ancient alien/eldritch monster and the title character and main antagonist of Stephen King's best-selling and award-winning 1986 novel It.

It is a shape-shifting creature known as a Glamour who is billions of years old. Although It lived on planet Earth for many years, It originated in a void/dimension outside the regions of space known as the Macroverse. Since its true identity is unclear, due to its shape-shifting abilities and being from another universe, it is mainly referred to as IT. The form of a female spider seems to be Its true physical form (or at least that is the closest thing the human mind can comprehend) on Earth, where it lives deep below the fictional town of Derry, Maine. It can morph into any other person, animal or object, and it uses this ability to appear as a target's loved ones to manipulate them or to appear as their worst psychological fear. However, Its favorite and most common form is that of a circus performer named "Pennywise the Dancing Clown". In this form and others it feeds on humans, preferably children, who are easier to scare and manipulate.

It was portrayed in its Pennywise form by Tim Curry in the 1990 television miniseries adaptation, and in the 2017 film adaptation and its 2019 sequel by Bill Skarsgård.

Oh, why so serious? You're supposed to be the man who laughs,

But those jokes were like your new movie: (aha!) mostly really sad.

Beep beep! You're a John Doe in my deadlights, and you're about to fall from a new height

'Cause you're weak and you've lost every fight to a knight who wears underwear over his tights! (Ha-ha-ha!)

I haunt nightmares and I'm ruthless!

Winning's not in your cards! Call me Arkham Asylum, I'm crazy with bars!

Jared Leto came out trying to look like he was Tekashi 6ix9ine!

So unless you've got a yummy younger brother, I think you'd better run

'Cause I've got 99 red balloons, bitch, and I dare you to take one!

Pennywise likes the devil, we have so much fun together,

But no one's dying to play with Joker, except for maybe Heath Ledger!

Puddin', you're an embarrassment, I'll beat you like you beat Harley Quinn.

That purple suit is something you should only see Steve Harvey in!

Ah, haha! I feast on your fears!

But you know what? I have a secret. (Shh!) It's like a very special toy.

If you wanna kill a Batman, eat him when he's a boy.

Arkham? Ha! You stole that from H. P. Lovecraft.

Who needs guards when you couldn't even escape Cesar Romero's mustache.

You jester, I'm Montresor, about to make you my Fortunato,

And seal this battle up like it was the Cask of Amontillado!

I'm the poster boy for missing person posters, Joker's gonna float with me

'Cause he just messed with the best wall-eyed rapper since the Notorious B.I.G.! (Wu-ha-ha!) 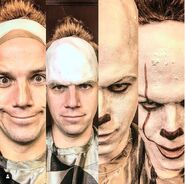 A collage of EpicLLOYD turning into Pennywise posted on EpicLLOYD's instagram page
Add a photo to this gallery
Retrieved from "https://epicrapbattlesofhistory.fandom.com/wiki/Pennywise?oldid=1470467"
Community content is available under CC-BY-SA unless otherwise noted.