Information on the actor/rapper

Felix Arvid Ulf Kjellberg, more commonly known by his nickname PewDiePie, was born on October 24th, 1989, in Gothenburg, Sweden. He is a YouTuber who is famous for his various "Let's Plays", in which he is often shown reacting to games in an over-the-top manner. He is best known for playing Amnesia, Happy Wheels, and Slender. His videos have gained him over 20 billion views and 100 million subscribers, making him the most subscribed YouTube channel related to video games, as well as the most subscribed YouTuber of all time, a position he achieved on August 16th, 2013, when he surpassed Smosh. Currently his channel does not have as much gaming-related content as before, as he switched his theme from gaming to memes, reaction videos, and commentary; having shows such as Meme Review, PewNews, YLYL (You Laugh You Lose), LWIAY (Last Week I Asked You, a parody of Jacksfilms' Yesterday I Asked You, or YIAY, series), and occasionally "making fun" of people on the TV series, Dr. Phil. He used to refer to his fans as his "bros" (now "9-year-olds") and ends each of his videos with a "brofist" in older videos. He has two dogs named Maya and Edgar. He currently resides in England with his Italian wife, Marzia Bisogin, who has her own YouTube channel.[1]

On February 14th, 2017, it was reported that Kjellberg was dropped from both Disney's and YouTube's premier service offerings following apparent association with antisemitism. He later issued an apology via his Tumblr blog, followed one week later by the release of a video response on his YouTube channel.

Flash in the Pan Hip Hop Conflicts of Nowadays:

PewDiePie as Mikhail Baryshnikov in Rasputin vs Stalin (cameo) 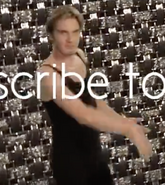 PewDiePie as Mikhail Baryshnikov in PewDiePie vs T-Series (cameo) 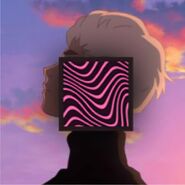 PewDiePie's retweet of his battle

To learn more about PewDiePie, visit the PewDiePie Wiki!