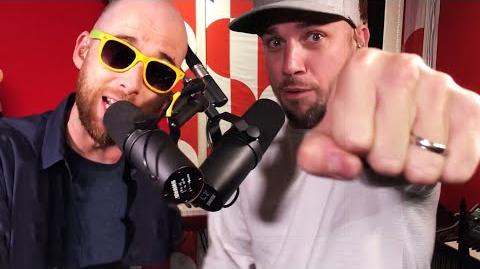 PewDiePie vs T-Series is the first installment of Flash in the Pan Hip Hop Conflicts of Nowadays, a spinoff of the Epic Rap Battles of History series. It features the YouTube personality, PewDiePie, rapping against the Indian music record label and film production company, T-Series. It was released on December 16th, 2018.

And I've still got more personality than this guy!

PewDiePie, let me dish up some truth:

You talk like a child; I'll call ya Hitler Youth!

I've seen your Bitch Lasagna; you've got no flow at all!

It sounds like your verses were written by Jake Paul!

Jumping you in subs is just my next hurdle!

First I'll crush you with my words like the Wall Street Journal!

Mr. Kumar was a hero; better watch what you say

Before I smack your ass back to the days of Let's Play!

While you're screaming like an autistic demon playing Happy Wheels!

And I would bet that those two dudes on Fiverr

Have a better education than most of your subscribers!

So don't come messing with the Indians, chief!

Why don't you make like some Hindus and give up the beef?