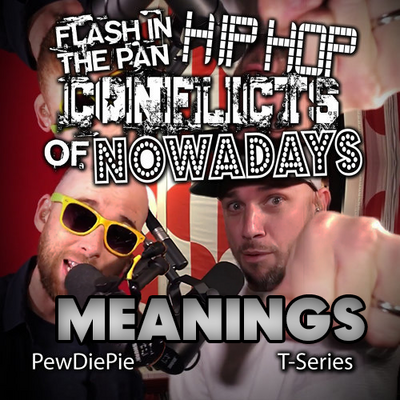 (T-Series' YouTube channel is run by a company, in contrast to PewDiePie, which is run by a single Swedish person named Felix Kjellberg.)

And I've still got more personality than this guy!

(T-Series says that, despite being a faceless and nameless company with no single identifiable representation, they still show more personality and likeability than PewDiePie, even though he's a single, real human.)

PewDiePie, let me dish up some truth:

(T-Series mimics the way PewDiePie pronounces his channel's name on his videos and proceeds to say he will state facts in the next line.)

You talk like a child; I'll call ya Hitler Youth!

(PewDiePie is known for talking immaturely or in a childish manner at times, and he also caused some controversy by making antisemetic jokes and spouting out racial slurs. The Hitler Youth was the youth wing of the Nazi Party that ruled Germany during World War II.)

I've seen your Bitch Lasagna; you've got no flow at all!

(PewDiePie has uploaded a diss track against T-Series titled "Bitch Lasagna,"[1] which T-Series dismisses as being a bad diss track due to the jaunty, rough flow of PewDiePie's speech in it. Since T-Series is an Indian company, the title itself is a reference to an insult directed at a woman over Facebook Messenger by an Indian man, which was shared on Reddit and has since become a popular meme.[2])

It sounds like your verses were written by Jake Paul!

(Jake Paul is a YouTuber infamous for his rap songs, notable for their poor quality, amongst many other bad acts and deeds.)

Jumping you in subs is just my next hurdle!

First I'll crush you with my words like the Wall Street Journal!

(This continues from the previous line, with T-Series saying its primary goal is not subscribers, but beating PewDiePie in this hip-hop conflict. The Wall Street Journal is a newspaper whose article on PewDiePie's antisemetic jokes in early 2017 caused Disney to sever ties with him,[3] putting them in the spotlight as one of PewDiePie's biggest enemies.)

(Scare PewDiePie was a YouTube Red original series starring PewDiePie that was canceled following a scandal where he paid two Indian men to hold up a sign saying "DEATH TO ALL JEWS", not expecting them to actually do it at all, through a site called Fiverr, where you pay people to do such acts e.g. making a green screen video or, in this case, holding a sign with what you want written on it. Markiplier is a fellow YouTuber and a friend of PewDiePie. PewDiePie says T-Series won't be able to scare him, and they would be better off trying to do it to Markiplier, who is known for his over-the-top reactions to the games he plays.)

(PewDiePie has made several videos where he paid people using Fiverr to say funny things. The two Indian men who PewDiePie hired on Fiverr have a Youtube channel called Funny Guys.[4])

(PewDiePie says that T-Series' practice for becoming one of the most subscribed channels takes the fun out of their company since they seem to have bought their way into being recognized on the platform.)

(Going on from the previous line, T-Series focuses mainly on its business rather than the quality of its product, which PewDiePie compares to McDonald's, a fast-food chain that makes cheap food and has become one of the biggest franchises in the world. The McRib is one of its most famous products that is only sold temporarily, but PewDiePie uses this to say T-Series gave up their rib to be where it is now. This is also a nod to the Indian nature of T-Series, saying that they lack a McRib because Indians generally do not consume pork, the primary ingredient of a McRib. In saying T-Series has no McRib, he also implies that they lack a product that would make their fans eager to want.)

(Bollywood is the Indian film industry, specifically Hindi, which T-Series is considered to be a part of. India’s film industry is extremely profitable, producing thousands of films each year. However, PewDewPie does not think even a Bollywood-sized budget would be equipped to handle his raps.)

(Most of PewDiePie's recent videos feature him talking to the camera while standing in front of his desk in his room. He says doing something so simple is still more worth watching than what T-Series makes.)

(T-Series' founder was Gulshan Kumar, who was known for his fortitute and hairstyle.)

(Kumar was assassinated by the Indian mafia in 1997. PewDiePie says that after this happened, the leadership of the company did not turn out quite as well.)

Mr. Kumar was a hero; better watch what you say

(T-Series warns PewDiePie that he shouldn't insult their founder.)

Before I smack your ass back to the days of Let's Play!

(PewDiePie initially uploaded video game Let's Plays on his YouTube channel where he would play through games and provide commentary. Later on, his content became more comedy-oriented and random, as he stated that his Let's Plays were something he did not enjoy doing because he had to exaggerate reactions and emotions to maintain his view count and make a living. However, when the PewDiePie vs T-Series feud subsided, with T-Series having the higher subscriber count, PewDiePie began to make Let's Play videos out of games such as Minecraft, Fortnite, and FNAF.)

(T-Series started as a cassette-selling company. Nowadays, they produce movies and long music videos as well.)

While you're screaming like an autistic demon playing Happy Wheels!

(PewDiePie used to make popular Let's Plays of the browser game Happy Wheels, where you take characters through trap-filled levels. These videos involved a lot of exaggerated screaming on his part. T-Series says PewDiePie did this to the point of sounding like he had a mental problem or seemed possessed.)

And I would bet that those two dudes on Fiverr

(This again references the two Indian men that PewDiePie paid on Fiverr to show a sign saying "DEATH TO ALL JEWS".)

Have a better education than most of your subscribers!

(Being a country with a serious wealth gap, parts of India are in poverty that they cannot receive education. The two Indian men are living in the less prosperous part of India, therefore they relied on Fiverr to make a living. PewDiePie currently addresses his fans as "nine-year-olds," as a replacement of "bros." T-Series mocks PewDiePie's fan base, as they are just kids with less knowledge than the two Indian men with little to no education.)

So don't come messing with the Indians, chief!

(Native Americans are often referred to as Indians and would usually colonate in tribes and have a leader, or "chief." T-Series sarcastically calls PewDiePie chief and says he should quit battling while he's at it.)

Why don't you make like some Hindus and give up the beef?

(Hinduism is the largest religion in India, and Hindus do not eat beef, as they consider cows to be sacred. Beef is an informal term for a grudge, and can also refer to cattle meat. T-Series suggests to PewDiePie that he stop beefing with them since he has done so with other YouTubers in the past.)

(PewDiePie often plays games with his fellow YouTubers and interacts with fans.)

(PewDiePie accuses the T-Series channel of using sub bots to get more subscribers. This is also a reference to how on December 13, YouTube announced that it will be removing spam subscriptions from your channel and all those subscribers will be gone from your channel. After the update, T-Series' channel lost two hundred thousand subcribers.PewDiePie used to end his videos with Brofisting his fans, holding his closed fist up against the camera.)

(T-Series mainly uploads music videos, although PewDiePie says that they all sound the same due to the beat being similar.)

(PewDiePie says that, no matter how high-quality T-Series' videos are from their productions and how much time and effort is put into them, they will always be complete trash.)

(Machinima is a company for which PewDiePie used to make gameplay videos. He says this with a pun on "one man machine," referring to a single person being able to do all the work by himself. PewDiePie says his effort in making videos has been solely his doing, whereas T-Series has an entire crew to make their videos, so PewDiePie says they can't "hold a candle," meaning they shouldn't be compared.)

(PewDiePie once joked he would delete his channel after passing 50 million subscribers, which a few media outlets took seriously. When the milestone was passed, he ended up deleting his joke channel Jack septiceye2, which parodied fellow YouTuber JackSepticEye. PewDiePie is confident that T-Series will never surpass him, betting that if they are able to, he will delete his channel.)

Retrieved from "https://epicrapbattlesofhistory.fandom.com/wiki/PewDiePie_vs_T-Series/Rap_Meanings?oldid=1456912"
Community content is available under CC-BY-SA unless otherwise noted.