Ragnar Lothbrok (or Lodbrok) is a legendary Viking hero, as well as, according to the Gesta Danorum, a legendary Danish and Swedish king. He is known from Old Norse poetry of the Viking Age, Icelandic sagas, and near-contemporary chronicles. According to the traditional literature, Ragnar Lodbrok distinguished himself by many raidings against the British Isles and the Holy Roman Empire during the 9th century. He also appears in Norse legends, and according to the legendary sagas Ragnarssona þáttr and Sögubrot af nokkrum fornkonungum, Ragnar Lodbrok's father was the legendary king of the Swedes, Sigurd Ring.

According to the sagas, Ragnar earned the title "Hairy-Breeches" or "Shaggy Breeches" when he saved a princess from a giant, venomous serpent. To protect himself from the serpent's bites, he filled his pants with horse hair and pitch before soaking them in cold seawater, causing them to harden until they were near impenetrable. Ironically, Ragnar was allegedly executed by the Northumbrian king Ælla after a failed raid, thrown into a pit of snakes. He was succeeded by his son Ivar the Boneless, who led the "Great Heathen Army" in invading Britain, killing Ælla, and conquering much of the island.

Threatening to conquer Ragnar is bold

For a king who got whacked by a ten year old!

I'll sacrifice you to Odin while drinking horns of mead!

Good thing you hold a Red Cross 'cause that's who you're going to need!

You built your army by raising English taxes!

I raised my army taxing English asses with my axes!

And who are you to talk about the circle of life?

Your old lady can't feel the love on any night! (Haha!)

Your only son was illegitimate; you heired on the side!

I'll twist your spine like the end of the Plantagenet line!

I'm just a warrior; I'm not a linguist,

But I think the king of England should probably speak English! (Ha!)

You took Acre and Jaffa like a piece of cake,

You saw the Holy Land, but couldn't go all the way!

We should call it the Crusade of Richard the First Base!

You want to fight me? Take off the tin shirt!

I'll be waiting in my birthday suit, going berserk!

Ding-dang-dong, morning bells warn about me at the break of dawn,

And I'm putting you to sleep like your brother John!

'Cause I'm the Allfather's spawn!

You couldn't even beat a Salad in a fight! (Eh!)

You're as soft as Monty Python knights! (Whaa!)

You went from chainmail to chained up in jail

Til Mommy drained England to pay for your bail!

But no King's Ransom will save you from these bars, son.

I'm eating you alive like the gangrene you died from!

Lodbrok in his "birthday suit" 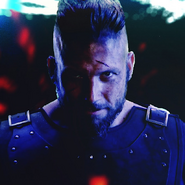 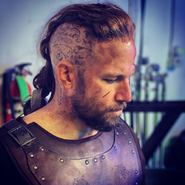 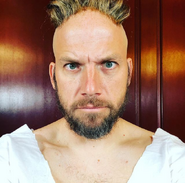 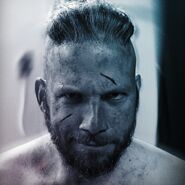