Ragnar Lodbrok vs Richard The Lionheart 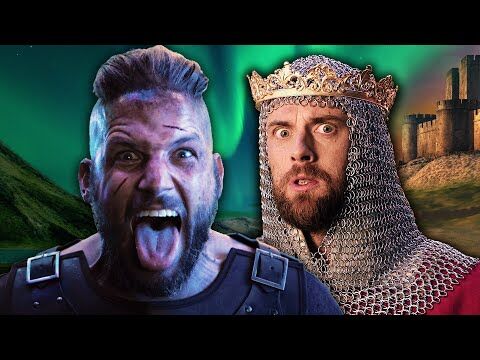 Ragnar Lodbrok vs Richard The Lionheart

Ragnar Lodbrok vs Richard The Lionheart is the eighty-third installment of Epic Rap Battles of History. As of now, it is currently unknown if this is considered the start of Season 7 or another bonus battle. It features legendary Viking hero, Ragnar Lodbrok, rapping against the crusader king of England, Richard the Lionheart. It was released on June 14th, 2021.

Nice Peter as Richard the Lionheart

I'm Richard I, from the Third Crusade!

That only leaves room for you in second place!

The chivalrous swinger of the sword and mace

And I'll kill you when I spit like a pit full of snakes!

I'm the number one Dick rising up to make you feel small,

My battering ram slams through your shield wall!

I'll announce at the next of your Things

That I'm chomping through your family like boneless wings!

Of course you got avenged by a kid with no bones,

Your own story ended worse than Game of Thrones!

I'm the Lion King, man, but that's a messed up circle of life!

I'm scared of no foe, I'm backed by the Trinity,

I'll conquer you on my day off like you were Sicily!

Threatening to conquer Ragnar is bold,

For a king who got whacked by a ten year old!

I'll sacrifice you to Odin while drinking horns of mead!

Good thing you hold a Red Cross 'cause that's who you're going to need!

You built your army by raising English taxes!

I raise my army taxing English asses with my axes!

And who are you to talk about the circle of life?

Your old lady can't feel the love on any night! (Haha!)

Your only son was illegitimate, you heired on the side.

I'll twist your spine like the end of the Plantagenet line!

But I think the King of England should probably speak English! (Ha!)

You took Acre and Jaffa like a piece of cake,

You saw the Holy Land but couldn't go all the way!

We should call it the Crusade of Richard the First Base!

Sail back north with your barbarian goons

Because I'm tearing down your legacy: leaving it in runes!

Your real self next to your legend disappoints!

I see you shaking in your shaggy little pants like "Zoinks!" (Ha!)

Who invented the royal me? We!

Who's the predominantly fictional MC? Thee!

You're a wannabe, mon ami, kneel down and honor me.

Richard coming through in the end like Sean Connery!

The double-coronated blood and gore gourmet;

You might have the axe, but I make a body spray!

Lionheart's the sobriquet but I strike like a cobra!

If I wanted to fight loser Vikings, I'd go to Minnesota!

You want to fight me?! Take off the tin shirt!

I'll be waiting in my birthday suit, going berserk!

Ding Dang Dong, morning bells warn about me at the break of dawn.

And I'm putting you to sleep like your brother John!

'Cause I'm the Allfather's spawn!

You couldn't even beat a Salad in a fight! (Uh!)

You're as soft as Monty Python knights! (Ya!)

You went from chainmail to chained up in jail

Til Mommy drained England to pay for your bail!

But no King's Ransom will save you from these bars, son.

I'm eating you alive like the gangrene you died from!

Ragnar Lodbrok vs Richard The Lionheart. ERB Behind the Scenes. Epic Rap Battles of History.
Community content is available under CC-BY-SA unless otherwise noted.