Rasputin battled Joseph Stalin preceding Vladimir Lenin, Mikhail Gorbachev, and Vladimir Putin in Rasputin vs Stalin. He also made a cameo appearance through reused footage in Alexander the Great vs Ivan the Terrible. He was portrayed by Nice Peter on both occasions.

Grigori Yefimovich Rasputin (Russian: Григорий Ефимович Распутин) was born on January 21st, 1869, in Siberia, Russia. Rasputin entered the Verkhoture Monestery in Russia with the intention of becoming a monk, but left shortly thereafter, presumably to get married. At age 19, he wed Proskovia Fyodorovna, and they later had three children.

As Russia entered World War I, Rasputin predicted that calamity would befall the country. In 1907, Rasputin was invited to see Tsesarevich Alexei, son of Tsar Nicholas II and Tsarina Alexandra, who suffered from hemophilia and was experiencing painful bleeding after an injury. Rasputin was seemingly able to provide Alexei with some relief through prayer and won the belief of Alexandra in that he was a man of God due to his apparent healing powers. Nicholas II took command of the Russian Army in 1915, and Alexandra took responsibility for domestic policy. Always Rasputin's defender, she dismissed ministers who were said to be suspicious of the "mad monk". Government officials tried to warn her of Rasputin's undue influence, but she continued to defend him, giving the impression that Rasputin was her closest adviser.

On December 29th, 1916, a group of conspirators, including the czar's first cousin, Grand Duke Dmitri Pavlovich, and Prince Felix Yusupov, invited Rasputin to Yusoupov's palace, and fed him wine and cakes laced with cyanide, but the poison seemed to have no effect. Baffled, but not deterred, the conspirators repeatedly beat and finally shot Rasputin several times. He was wrapped in a carpet and thrown into the Neva River, only to be discovered three days later. An autopsy revealed that there was water inside Rasputin's lungs at the time of his death, and it was concluded that he died by drowning at the age of 47 on December 30th, 1916, in St. Petersburg, Russia.

Rasputin, alongside Mikhail Baryshnikov, Vladimir Lenin, Mikhail Gorbachev, Vladimir Putin, and Joseph Stalin, appeared in Red Square during the line in Ivan the Terrible's first verse, "I'm the first Tsar of all of Russia!"

Try messing with the Mad Monk, you'll be sorry, yo!

How many dictators does it take

To turn an empire into a union of ruinous states?

It's a disgrace what you did to your own people!

Your daddy beat you like a dog and now you're evil!

You're from Georgia, sweet Georgia,

And the history books unfold ya

As a messed up mutha fucka bent in the mind

Who built a superpower, but he paid the price

With the endless destruction of Russian lives!

If you're the man of steel, I spit kryptonite!

I can end you with a whisper to your wife.

Come on, bring it on, I'm ready to start brawlin'

I don't mean to Russia, but you just seem like you're Stalin

You're just five-foot-four but your failure's epic-sized

You're doing worse in this battle than the farms you collectivized

I'll beat you past the point my magic powers can heal

Man of Steel? You fat pig, more like Man of Squeal

I was poisoned, shot and beaten and I still fought back like no sweat

I'm so hard to kill, my rap name should be 50 Kopek

I was shot and poisoned, my assassin's plot: sadistic

But that couldn't stop the mystic, if you think you can, you're optimistic. 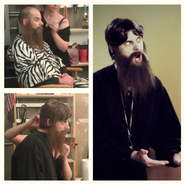 A collage of Nice Peter turning into Rasputin posted on ERB's Facebook page
Community content is available under CC-BY-SA unless otherwise noted.
Advertisement