Richard the Lionheart (coronated as Richard I) was a crusader who was involved in the Conquest of Cyprus. He was King of England for a decade from 1189 to 1199. His reputation as a military leader earned him the nicknames of Richard the Lionheart and Richard Oc-e-Non. He also ruled as Duke of Normandy, Aquitaine and Gascony, Lord of Cyprus, and Count of Poitiers, Anjou, Maine, and Nantes, and was overlord of Brittany at various times during the same period. He was the third of five sons of King Henry II of England and Eleanor of Aquitaine and seemed unlikely to become king, but all his brothers except the youngest, John, died before their father.

He was born in England, where he spent his childhood; before becoming king, however, he lived most of his adult life in the Duchy of Aquitaine, in the southwest of France. Following his accession, he spent very little time, perhaps as little as six months, in England. Most of his life as king was spent on Crusade, in captivity, or actively defending his lands in France. Rather than regarding his kingdom as a responsibility requiring his presence as ruler, he has been perceived as preferring to use it merely as a source of revenue to support his armies. Nevertheless, he was seen as a pious hero by his subjects. He remains one of the few kings of England remembered more commonly by his epithet than his regnal number, and is an enduring iconic figure both in England and in France.

I'm Richard I, from the Third Crusade!

That only leaves room for you in second place!

The chivalrous swinger of the sword and mace,

And I'll kill you when I spit like a pit full of snakes!

I'm the number one Dick rising up to make you feel small!

My battering ram slams through your shield wall!

I'll announce at the next of your things

That I'm chomping through your family like boneless wings!

Of course you got avenged by a kid with no bones!

Your own story ended worse than Game of Thrones!

I'm the Lion King, man, but that's a messed up circle of life!

I'm scared of no foe! I'm backed by the Trinity!

I'll conquer you on my day off like you were Sicily!

Sail back north with your barbarian goons

Because I'm tearing down your legacy, leaving it in runes!

Your real self next to your legend disappoints!

I see you shaking in your shaggy little pants like "Zoinks!" (Ha!)

Who invented the royal me? We!

Who's the predominantly fictional MC? Thee!

You're a wannabe, mon ami! Kneel down and honor me!

Richard coming through in the end like Sean Connery!

The double-coronated blood and gore gourmet;

You might have the axe, but I make a body spray!

Lionheart's the sobriquet, but I strike like a cobra!

If I wanted to fight loser Vikings, I'd go to Minnesota! 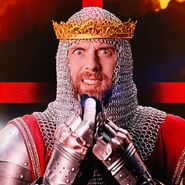 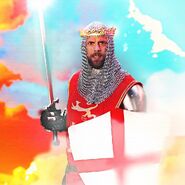 A preview of Richard the Lionheart posted on the ERB Twitter. 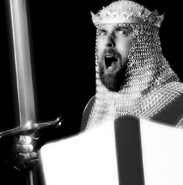 A preview of Richard the Lionheart posted on the ERB Instagram. 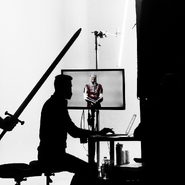 A set photo of Richard the Lionheart posted on the ERB Twitter.