Rick Grimes is a fictional character in the comic book series The Walking Dead, created by Image Comics, and is portrayed by Andrew Lincoln in the television series of the same name. Created by writer Robert Kirkman and artist Tony Moore, the character made his debut in The Walking Dead #1 in 2003. The primary protagonist of both series, Grimes is a small town sheriff's deputy who awakens from a coma to find the world overrun with walkers.

In the comic series, he searches for his wife, Lori Grimes, and his son, Carl Grimes. As he encounters many survivors along the way, who originate at an Atlanta camp, he gradually becomes the de facto leader to the survivors, and is often faced with many leadership struggles. He soon overcomes this, and changes his mindset, believing in safety in numbers. His leadership qualities and experience leads him to become the Alexandria Safe-Zone's leader in Alexandria, Virginia, while continuing to deal with many human threats along the way that cost the lives of his friends and loved ones.

In the television series, Grimes is at first, typically calm, smart, and a good friend and father, but will often stubbornly cling to his personal strong moral code, which has resulted in numerous bad calls and extra stress within the group. His darker side has been shown through his brutality as he does not hesitate to kill someone whom he views as a threat. His moral compass is challenged in many ways and he, in an attempt to prevent more death and loss, begins to shut everybody else out. However, after escaping Terminus, Grimes has accepted his leadership position to which the group respects him for this. He now understands that he can still retain his humanity by protecting his friends and has personally stated that he views his group as his family.

Carl, stay back. This is gonna get bad.

I'm 'bout to show this lab rat how to be a real dad.

'Cause Sheriff Grimes rhymes dirty like my armpit stains!

I'm a post-apocalyptic cop who's got a lot of issues.

Pop a cap in you and splatter the brain you misuse!

Cooking up blue sky and bigger lies for Skyler,

You tore your family apart, sin by sin.

Where I live, it happens literally limb from limb!

So write this down in your pancakes so you won't forget it:

I kill zombies that are better men than you before breakfast.

Carl! I said stay back with the others,

While I finish this bitch like you finished your mother.

You ain't the danger to me, Walt, so knock all you want.

I'll watch you get eaten on my fucking front lawn.

[Pop] a cap in your gray matter

If you threaten my group

'Cause you don't wanna test me I'm cold

You're feeble and selfish

Carl, you stay back and protect the others 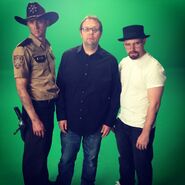 Retrieved from "https://epicrapbattlesofhistory.fandom.com/wiki/Rick_Grimes?oldid=1466242"
Community content is available under CC-BY-SA unless otherwise noted.