Robin McLaurin Williams was born on July 21st, 1951, in Chicago, Illinois. He was an actor and comedian who is known for his improvisational skills and the wide variety of memorable character voices he created.

During the mid-1970s, Williams began performing stand-up comedy in San Francisco and Los Angeles, and is credited with leading San Francisco's comedy renaissance. After rising to fame playing the alien Mork in the sitcom Mork & Mindy, which was spun off from Happy Days, Williams established a career in both stand-up comedy and feature film acting.

After his first starring film role in Popeye, Williams starred in numerous films that achieved critical and commercial success, including The World According to Garp, Moscow on the Hudson, Good Morning, Vietnam, Dead Poets Society, Awakenings, Aladdin, The Fisher King, Jack, Patch Adams, One Hour Photo, and World's Greatest Dad, as well as box office hits, such as Hook, Mrs. Doubtfire, Jumanji, The Birdcage, Good Will Hunting, and the Night at the Museum trilogy. Williams had been nominated four times for the Academy Awards, but has only won one for Best Supporting Actor for his performance as psychologist Sean Maguire in Good Will Hunting. He also received two Primetime Emmy Awards, six Golden Globe Awards, two Screen Actors Guild Awards, and four Grammy Awards.

On August 11th, 2014, Williams committed suicide in his Paradise Cay, California home at age 63. His wife attributed his suicide to his struggle with Lewy body disease.

I'm a genie in the bottle for some comic relief!

O Carlin, my Carlin, what can I say about you?

Mork aged backwards and Joan, you must too!

Yo Pryor, I Doubtfire makes a good shampoo!

Left you running down the street like "Oh, no!"

And believe me, we've all hit plenty of bumps.

(Yeah!) But now I've got the Flubber flows that'll get the club jumping!

You got second-hand raps. "Found 'em Good Will Hunting!"

Got more hair on my arms than a Monchhichi!

I love the prince, but you'll never have a friend like me!

Thanks folks, that's my time! Gotta set myself free!

And yo Pryor, I Doubtfire makes a good shampoo!

Lit yourself up and ran down the street like "Oh, no!"

And the road ain't been easy, we've played plenty of dumps,

But I got the Flubber flows that'll get the club jumping!

You got second-hand raps. "Hey we found these Goodwill Hunting!"

That's my time now watch me set myself free!

But you couldn’t hold a candle to my success if you were granted three wishes!

But don’t hold candles Richard, we all know what happens then!

There’s a sweetness to comedy that all of you lack

And weird for me to end this battle with that 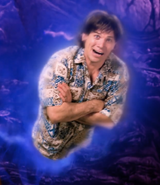 Robin Williams as the Genie