Romeo Montague, alongside Juliet Capulet, battled Bonnie & Clyde as a part of Romeo & Juliet in Romeo and Juliet vs Bonnie and Clyde. He was portrayed by Nice Peter.

Romeo Montague was created by William Shakespeare in his play, Romeo and Juliet. He is the son of the House of Montague, a political faction of Italy. Originally pining after a girl named Rosaline, he falls in love with Juliet Capulet – of the rival House of Capulet faction – at a masquerade party. He later kills Juliet's cousin, Tybalt, after Tybalt kills Romeo's close friend, Mercutio. For this, Romeo is banished from Verona by Mercutio's cousin, Prince Escalus. He returns when he hears that Juliet has passed, although she is feigning death to avoid arranged marriage. He then kills Paris, Juliet's suitor and to-be husband, and drinks poison over her "dead" body. The lovers' deaths teach both their families a harsh lesson which results in the end of their feud.

[Note: Romeo is in blue, while Juliet is in regular text.] 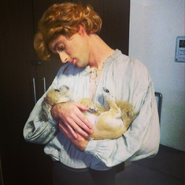 An early picture of Nice Peter as Romeo