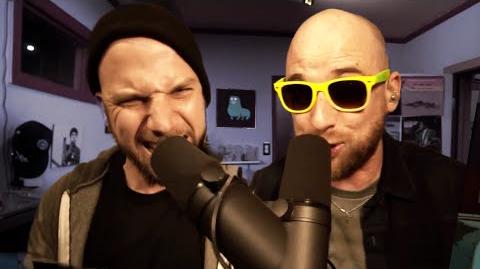 This battle was turned into an official ERB, with revised lyrics, an edited beat, and the addition of Wendy as a third-party rapper. It was released on June 8th, 2019.

EpicLLOYD as the Burger King

Welcome to BK! How can I serve you today?

One flame-broiled ass clown? Have it your way!

You can't do fast food half as good as I do!

Your pink slime meat turns my asshole to a drive-thru!

Your friends are a combo meal of weird lookers!

You got a bird, a burglar, and a big purple booger!

(Man!) Take these wack McRaps off the menu!

I'll call you Ronald Donald 'cause there's no MC in you!

Why don't you call me Ronald Jeremy? 'Cause I'm getting nasty

Like the Whoppers that you sell made of horse lips and ass meat!

Ask Rick and Morty who's the lyrical boss!

I've got lines for days; call me Szechuan Sauce!

The undisputed G.O.A.T. of putting burgers in bellies!

I'm Coke to your Pepsi; I'm Mac, you're Android!

Let's be real: I'm Nice Peter and you're EpicLLOYD!

You're number one like the piss I took in your ball pit!

Them rhymes you just spit are a Ray Kroc of shit!

You creepy ass clown, you're so spooky, it's insane!

You look like you just ate someone's brother in a storm drain!

You can't beat the king with leaders like these!

The whole head of your government's name is Mayor McCheese!

I Ain't Loving shit, even if Timberlake sings!

I'm running circles 'round you like my onion rings!

(The onion rings are pretty good.)

But that last verse was lifeless! You had no joy in it!

Last time I saw a rapper this plastic, there was a toy in it!

Cheetos, dude? Get your recipes together, man!

I've had the same fries since I was Willard Scott the Weather Man!

Call me MC Flurry 'cause I'm so chill!

My raps sleep at my house because they're so ill!

In the contest of best mascot in town,

You might be the King, but I wear the crown!