Rufus made a cameo appearance in Lewis and Clark vs Bill and Ted. He was portrayed by Sam Macaroni and voiced by Nice Peter.

Rufus is a character from Bill & Ted's Excellent Adventure, as well as its sequel, Bill & Ted's Bogus Journey, and other spin-off media. He guides/mentors Bill and Ted during the start of their journey and appears again when they finish to tell them about the future their music creates. He was portrayed by the late comedian George Carlin.

Rufus appeared from the phone booth time machine during Bill & Ted's second verse after Ted said "I don't know" in response to Bill asking, "What do we do?" He says, "Be excellent," and then opens his jacket while dancing as Bill and Ted rapped their next line. He disappeared in the next shot. 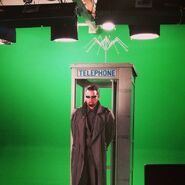 Rufus standing in front of the phone booth

Bill & Ted with all historical characters and Rufus in a scrapped scene
Add a photo to this gallery
Retrieved from "https://epicrapbattlesofhistory.fandom.com/wiki/Rufus?oldid=1449578"
Community content is available under CC-BY-SA unless otherwise noted.