Sacagawea made a cameo appearance in Lewis and Clark vs Bill and Ted. She was portrayed by Michelle Maloney.

Sacagawea, also known as Sakakawea or Sacajawea, was a Lemhi Shoshone woman who, along with her husband Toussaint Charbonneau, took part in the Lewis & Clark Expedition in 1804 to explore the Western territories of the American continent. She was only sixteen at the time, but proved herself to be a valuable member to the party. She is well-known for acting as an interpreter and helping the explorers in their dealing with the natives. During the expedition, Sacagawea had the opportunity to visit her brother and the rest of her nation (from which she'd been abducted as a child). The Sacagawea River was named in her homage, and the Sacagawea dollar coin features her face on the coin and has been used as a form of currency for the amount of 1 USD.

Sacagawea first appears fishing with Lewis & Clark during Bill & Ted's first verse. She is later seen along with Lewis and Clark throughout their second verse, rowing a boat with them on the Mississippi River and protecting the duo from a menacing American black bear.

Lewis, Clark, and Sacagawea with their fish 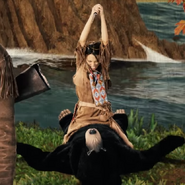 Sacagawea about to stab the American black bear
Community content is available under CC-BY-SA unless otherwise noted.
Advertisement