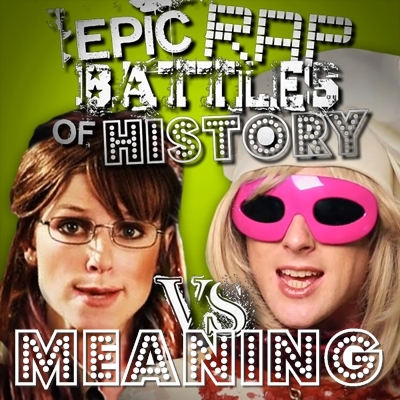 Oh boy, look what we have here:

(Palin can't believe what she sees as she battles Lady Gaga.)

A transvestite with a keyboard trying to be freak of the year!

(Palin sees Lady Gaga as a transvestite playing a keyboard. Gaga is known for her "freaky" sense of fashion, and she has possibly dressed up as a male before. There have also been rumors about Gaga being a hermaphrodite. Coincidentally, she is actually portrayed by a guy, Nice Peter, in this battle.)

Your voice sounds like a rooster having sex with a frog.

(Gaga's voice sounds very unpleasant to Palin, meaning that she doesn't like her music.)

They put a lot of lipstick on you, but you still look like a dog!

(This references Palin's presidential campaign in which she often portrayed herself as an average hockey mom and joked that the only difference between a hockey mom and a pit bull (a breed of dog) is lipstick. It also references Barack Obama's quote, "You know, you can put lipstick on a pig, but it's still a pig." This means that even with her makeup, Gaga still looks ugly to her.)

Put down that teacup, honey. Go put on some pants, and

(Gaga, somewhat oddly, is know for carrying around teacups, and her numerous outfits make her look pantless.)

Stop letting little monsters teach you how to dance, and

(Gaga refers to her fans as "little monsters". Palin is also likening her dancing to that of a monster, calling it ungraceful and awkward.)

You may be Gaga, but you ain't a lady at all.

(Sarah is calling her "Gaga", or crazy. Sarah then makes a reference to the Queen song Radio Gaga when clapping her hands to the beat of the chorus and putting her arms out in a dance from the song. She then plays the man card again by saying she isn't even a woman.)

I've seen those outfits you been wearing: that takes big balls!

(Palin is once again calling Gaga a transvestite because her outfits are so ridiculous that nobody has the balls to wear them.)

I think I'd rather elect a Smurf than vote for you.

(Gaga reckons a fictional Smurf could do a better job at politics than Palin.)

Governor of Alaska? That's like the principal of a home school!

(Palin was the Governor of Alaska before she ran for vice-presidency. Gaga says that because not many people live in Alaska and how little much of the U.S. pays attention to it, it's like being the head of a homeschool. Homeschools are usually managed by the parents involved because they have small numbers of students; hence, a principal isn't likely to be found in one. Alaska residents are usually of a mind to fend for themselves and devise their own rules to survive given the state's climate and terrain, so the governor is not needed quite as much.)

You are the sum of everything I despise,

(Palin was disliked because of her ignorance in politics, so Gaga hates on her more by saying that everything Gaga dislikes adds up to Palin's character and what she does.)

With the most dysfunctional family since the Jackson fucking Five!

(The Jackson Five had some difficulties during the time they had as a family, but Gaga says that Palin's family is worse. They have encountered numerous problems since her campaign. Notably, her 17-year-old unmarried daughter Bristol became pregnant and gave birth to Tripp Palin in 2008. In addition, her youngest son, Trig, who was also born in 2008, was diagnosed with Down syndrome.)

Just trust me: Your fifteen minutes of fame came and went.

(Sarah Palin had a short-lived fame since her party lost the 2008 election, and soon people began to forget about her. This also comes from a quote by Andy Warhol: "In the future, I think everyone will be famous for fifteen minutes.")

Go back to your igloo. Spend some time with your kids before they're pregnant.

(Gaga references the fact that Palin lives close to the Arctic, where some people live in igloos. Because of Bristol's pregnancy, Gaga believes Palin's children will have kids at a young age, so she ought to spend more time with them before this happens.)

Your frigid little body couldn't even handle what I do.

("Frigid" can refer to something cold, a frozen polar region (e.g. Alaska). Gaga says that Palin can't handle what she does in her career.)

I think the truth is, Sarah, my music just scares you.

(Gaga is calling Palin weak and scared, and even her music scares her.)

Your music doesn't scare me. I'm a mother of five!

(Palin is saying that Lady Gaga was wrong in her last line, and that she's tough because she has five children to handle.)

I killed moose with my bare hands before you were alive!

(Alaska's state animal is the moose, and Palin is saying that she was rough and tough before Lady Gaga was even born since she was able to kill moose with her own hands. As a child, Palin used to go hunting with her father and eat moose burgers. At the time of Gaga's birth, Palin was 22 years old.)

Everything you do is just a re-run of Madonna!

(Palin claims that Lady Gaga stole all of her ideas, costumes, moves, and songs from Madonna. Their music is indeed very similar in many ways.)

Your fans are in a frenzy like a bunch of gay piranha!

(Lady Gaga's "monsters" act ravenous and swarm like piranhas do. Her style also embraces those of homosexuals as well as the greater LGBT community, which makes up a substantial part of Lady Gaga's fanbase.)

I sound more intelligent than you when I fart!

(Gaga is saying that her farts are capable of making smarter comments than Palin, as she was known for making unintelligent comments in the media.)

I wonder if you even know how to spell the word "art"!

(She continues making a comment on how dumb Palin is. Gaga considers her style and music as art, and she says that Palin is so stupid that she can't even spell the 3-letter word.)

You don't belong in politics; you belong in a hockey game!

(According to Gaga, Palin should have never been nominated as the vice president. She should stick to just being a hockey mom, since hockey is a popular sport in a freezing state like Alaska. On top of that, there are lots of fights at least in professional hockey and Gaga is saying that this would be perfect for Palin’s “dysfunctional” family.)

(Sarah Palin was the running mate of John McCain in the Republican nomination for the U.S. presidency. Everyone would be sorry they nominated her and John McCain for the 2008 election. Even McCain regrets choosing her, as she is a main reason he lost.)

Retrieved from "https://epicrapbattlesofhistory.fandom.com/wiki/Sarah_Palin_vs_Lady_Gaga/Rap_Meanings?oldid=1467906"
Community content is available under CC-BY-SA unless otherwise noted.